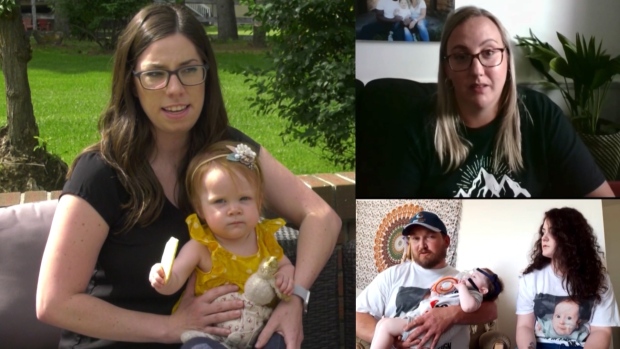 EDMONTON — More families are hoping a one-time treatment option for a rare condition will be made available in Alberta – while their young children still have time to see its benefits.

A fundraiser by his family to afford Zolgensma – a one-time gene replacement therapy proven to halt and in some cases reverse the effects of spinal muscular atrophy – has nearly reached $1 million.

While $1 million appears remarkable, the family is still $2 million short – and feels they’re running out of time. Zolgensma is most effective before a patient turns two years old.

The fundraising push has meant Kaysen’s birthday is as much a deadline as it is a celebration.

“Being his mom, I need to be able to tell him I did everything I possibly could for him,” Lana Bernardin, said.

She has been told there’s a “little bit of wiggle room” on the timing, but that doesn’t make Zolgensma any easier to access in Canada.

The drug is not approved for use in the country and costs $2.8 million south of the border.

As rare as the disease is, at least three families in the capital region are dealing with a spinal muscular atrophy diagnosis.

Harper Hanki is one year old.

“She’s fought tooth and nail through everything, from all the appointments, the physio three times a week, to the lumbar punctures every four months,” her dad, John Haki, told CTV News Edmonton.

“Seeing that there is a treatment that could potentially stop it in its tracks, and not being able to afford it… It was heartbreaking,” mother Amanda Hanki said.

Zolgensma’s manufacturer, Novartis, says in the U.S., the drug is “priced according to the value it provides to the patients, caregivers, healthcare system and to society as a whole.”

Novartis has offered up to 100 free doses of the drug in 2020 throughout the world through a program families apply for and are selected via random lottery.

Of the three families, only Harper is eligible for the program.

Reign, a four-year-old whose condition now requires round-the-clock breathing assistance and a feeding tube, does not qualify.

His parents, like Kaysen’s and Harper’s, hope the government will step in to speed up the approval process.

“This is a no-brainer,” Reign’s dad, Ryan Johnston, said.

The only treatment currently allowed in Canada requires three yearly spinal injections for a patient’s life.

“(Zolgensma) is not only going to heal these children, it’s going to save us millions and millions of dollars, over the course of a lifetime.”

Health Canada has placed the drug under priority review, cutting the nine-month process in half.

Regardless, Kaysen will be celebrating his second birthday on Friday with a drive-thru party.

With a report from CTV News Edmonton’s Jeremy Thompson