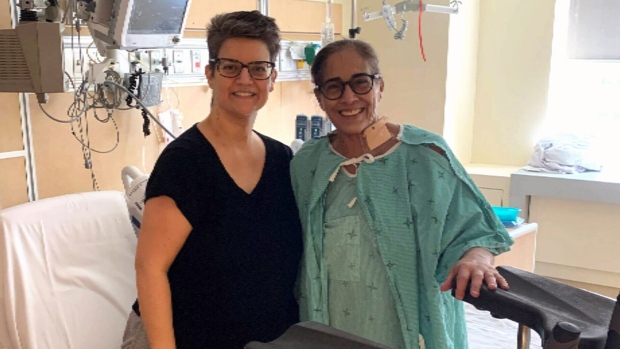 TORONTO — Joy MaGarrey and Diane Peirce are strangers, but MaGarrey gave the gift of life when she donated a part of her own liver to Peirce, who was dying from a rare liver disease.

Peirce had been on the liver transplant waiting list for more than two years and her situation was looking grim.

“It felt a bit surreal, because you’re kind of on the edge all the time, wondering when you’re going to get the [transplant] call.”

Doctors had diagnosed her with primary sclerosing cholangitis (PSC), a disease that shrinks the bile ducts in the liver, causing bile to accumulate and damage the organ. There is no cure for PSC and most patients eventually require a transplant.

But what Peirce didn’t know was the odds of getting a new liver were stacked against her.

One factor is that most liver donations are too big for women, because the deceased donors are more often men. But importantly, the MELD (model for end-stage liver disease) scoring system, which uses various biological measurements to determine the urgency with which a transplant is needed, also largely favours men.

The transplant community has known about this disparity since the early 2000s, not long after the MELD system was adopted, according to experts, but little has been done to improve the system.

“We need to look at what are the factors that are underlying this disparity, and what we can do in order to rectify this problem,” said Dr. Mamatha Bhat, a hepatologist with University Health Network’s (UHN) Ajmera Transplant Centre and senior author of the study.

The study concluded that women can overcome the transplant inequity through access to a living donation.

Living donors give a portion of their liver to the patient; the donor’s own liver regenerates to its normal size within a few months.

The paper hopes its findings will promote discussions around the disparity, drive policy changes that can narrow that gap, and highlight the role living donations can make in saving lives. Bhat’s findings will be part of the conversation during Living Donation Week, a campaign hosted by the UHN’s Centre for Living Organ Donation that kicks off Monday, Sept. 14.

To that end, Peirce’s family launched a campaign to find a living donor by creating a website and sharing her story publicly.

“They built a website for me. We just blasted it everywhere. And I think there was 12 to 1,400 hits to the website,” said Peirce.

About half-an-hour away, the campaign caught MaGarrey’s eye. She turned out to be a perfect match, so in late April, at the height of the COVID-19 lockdown, she gave a part of her liver to Peirce during a procedure at UHN’s Toronto General.

“It really was just a couple of months out of my life. It was a week in the hospital. I mean, it was major surgery, I don’t want to make light of that. I do have a scar. But at the end of the day, that’s a small price for me to pay to give somebody else, hopefully, you know, many, many, many more years of memories with their family.”

Without her family’s efforts, Diane says she could still be waiting for a liver — or died before one became available.

“Eternal gratitude that someone actually gave me this gift. A donor that didn’t even know me.”