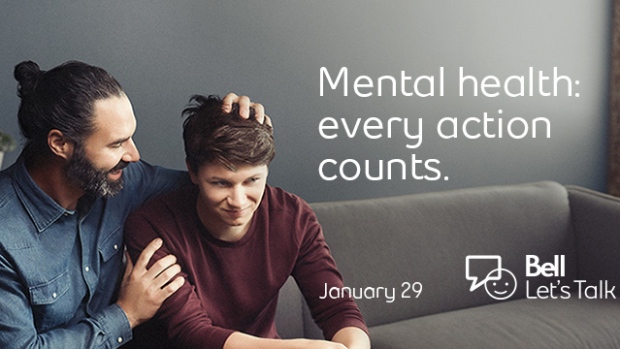 TORONTO — Today marks the tenth annual Bell Let’s Talk Day, a national conversation around mental illness aimed at fighting stigma and raising money for the cause.

More than 1 billion interactions have been recorded since the launch in 2011, raising more than $100 million toward mental health initiatives across Canada.

This year, the company will donate 5 cents every time someone engages with the campaign on social media or whenever Bell customers send text messages or make calls.

Here’s how to make your posts count.

On Twitter, every tweet and retweet using the hashtag #BellLetsTalk and #BellCause will be counted toward the campaign. Using the correct hashtag is important to being counted toward the goal, and the official hashtag will automatically generate the special Bell Let’s Talk emoji.

On Instagram, Bell will make a donation for every view of this video on the official Bell Let’s Talk page.

On Facebook, users can join in by viewing the same video or by updating their profile picture with the Bell Let’s Talk 2020 frame.

Five cents will also be contributed for every view of the Bell Let’s Talk Day video on YouTube.

Among the earliest tweets of the campaign was one by Star Trek actor William Shatner early this morning.

Hudson’s Bay Foundation has also committed to donate five cents to the Centre for Addiction and Mental Health for every tweet using both #BellLetsTalk and @HudsonsBay.

Money raised from Bell Let’s Talk supports more than 1,000 organizations across the country, including mental health initiatives for children and youth, Indigenous communities and military families.