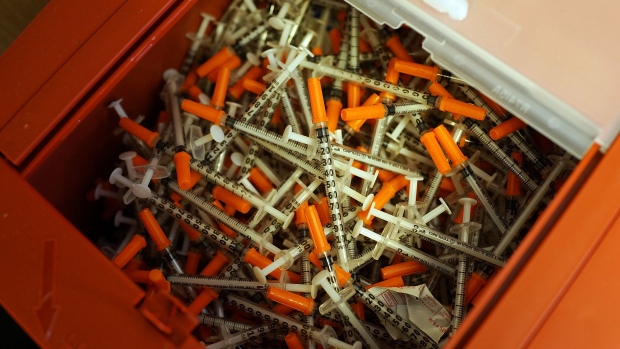 The latest data from the US Centers for Disease Control and Prevention shows that the country lost 105,752 lives to drug overdoses in the 12-month period ending October 2021. And while most of those overdoses involved the illicit synthetic opioid fentanyl, experts say that an adulterated and contaminated drug supply is also leading to deaths.

Among the most concerning changes in the illicit drug market has been the appearance of xylazine, a veterinary tranquilizer also commonly known as “tranq” or “tranq dope,” said Naburan Dasgupta, an epidemiologist and senior scientist at the Gillings School of Global Public Health at the University of North Carolina, Chapel Hill.

“When you look at each individual death record, when you look at the actual files and the actual chemical analysis, you see other peaks in there … which are definitely not fentanyl and are these other contaminants that are in the drug supply,” explained Dasgupta, who has been studying drug use and infectious diseases for over two decades.

According to the CDC, about half of drug overdose deaths involved multiple drugs in 2019, the most recent year for which data is available.

But detecting what drugs were involved in an overdose isn’t always easy. One study of drug samples collected in Vermont and Kentucky found multiple active components in at least 89 per cent of drugs sold as opioids or cocaine.

Analysis of drugs seized by the Drug Enforcement Administration at or near the southwest border has found drugs to contain just 5 per cent to 10 per cent of what they claim and often include adulterants or cutting agents like acetaminophen, benzocaine and xylazine.

Xylazine is not approved for human use. It has heavy sedative effects like an opioid, but it isn’t an opioid, and it doesn’t respond to the opioid overdose antidote, naloxone.

“Some very eagle-eyed street chemists in Philadelphia picked up on this early. Connecticut has released reports on it; we see it in Michigan, all around the country, even in Canada,” Dasgupta said.

Fentanyl is fast-acting opioid, and users say that adding xylazine can extend the duration of that high, said Joseph Friedman, a researcher at the University of California, Los Angeles and co-author of the recent paper.

Xylazine is just one of the many adulterants found in the illicit drug supply that has shifted from heroin, a natural opioid derived from poppy plants, to lab-made synthetics such as fentanyl.

“All of a sudden, you can synthesize hundreds of compounds and kind of mix them together and see what does the best in the market,” Friedman said. “People are synthesizing new benzodiazepines, new stimulants, new cannabinoids constantly and adding them into the drug supply. So people have no idea what they’re buying and what they’re consuming.”

Some of these adulterants or additives may be as simple as sugar or artificial sweeteners that are added for taste, or additives or fillers that bulk up the drug. Sometimes, they may just be contaminants left over from the manufacturing process. But all of these things can carry real-life health harms, Dasgupta said.

Like an opioid, xylazine can depress the respiratory system, so the risk of overdose multiplies when it’s combined with heroin or fentanyl.

Also, “in the veterinary literature, we know that it causes a really bad severe form of anemia. And so when people are injecting heroin that’s contaminated with xylazine, they can end up with a near-fatal form of blood iron deficiency,” Dasgupta said. “We had one person here who ended up going to the hospital needing multiple blood transfusions. And it was all because of the xylazine.”

The drug is also associated with skin and soft tissue wound infections.

It’s difficult to determine just how prevalent xylazine is in the drug supply or in typical use.

One analysis from the CDC found that just 1.2 per cent of deaths were attributed to xylazine in 23 states in 2019. But the report also notes that it may be an undercount because testing for xylazine is not standard.

“We don’t have enough of a robust drug checking system to know reliably how far it’s penetrated and in what areas,” said Maya Doe-Simkins, co-founder of Harm Reduction Michigan.

This leaves a more dangerous and threatening drug landscape for users to navigate.

Some are able to check their drugs with infrared or mass spectrometry, tools traditionally used by forensic teams that are now being adopted by harm-reduction groups to test drugs. Other users are having to learn via word of mouth.

But he hopes what happened over the past decade can inform the response now.

“This time 10 years ago, there was a missed opportunity to effectively respond to fentanyl. And hopefully we can do a better job this time around.”