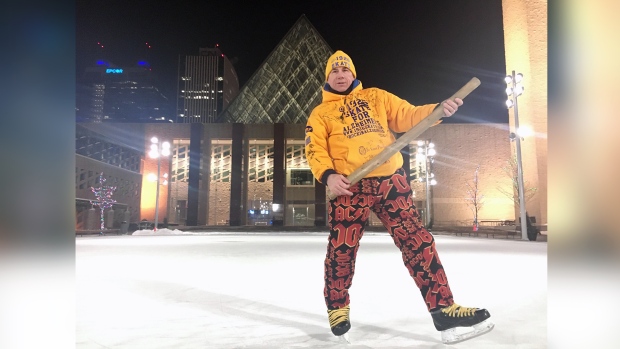 EDMONTON — An Ontario hockey referee is skating for 19 hours and 26 minutes at Edmonton’s City Hall rink to raise money and awareness for Alzheimer’s.

He’s skating to raise money and awareness as a tribute to his mother, who was born in 1926, and died from Alzheimer’s in 2013.

“I started it in Toronto in 2012 as a dedication to my mother, who was born in 1926 and battled with Alzheimer’s for the better part of 20 years, so as a recreational ice hockey referee in Toronto, I found a way to give back,” McNeil said.

“Every penny I raise goes to Alzheimer’s Alberta Northwest Territories. Every city I skate in, I skate for their local Alzheimer’s society.”

In 2019 he skated in the seven cities in Canada with an NHL team, including Edmonton. This year he’s skating in 12 cities in all 10 provinces.

“I’m going to be complete in New Brunswick by February 21.”

“The cool thing is watching these cities wake up like this, and Edmonton is just a fantastic city, so I’m really enjoying this,” he said on Monday morning.

He skated in Calgary on Friday, despite the bitterly cold temperatures.

“I stepped on the ice in Olympic Plaza in Calgary on Friday at 5 p.m., and it was nasty. It was cold.”

McNeil stays charged by listening to AC/DC for the entire duration of each skate. He has a special connection with the band.

“I liked their music my whole life, and then five years ago I found out that Malcolm Young of the band, one of the founding brothers, was diagnosed with dementia.”

“I always have my music in my ears anyway, so I just decided five years ago I was going to dedicate the skate to Malcolm musically and I was just going to listen to AC/DC.”

And last year, during his skate in Edmonton, AC/DC found out about McNeil’s dedication.

“The band actually contacted me in my hotel room here in Alberta and donated $19,260 to the Alzheimer’s Music Program right across Canada and it just supercharged me.”