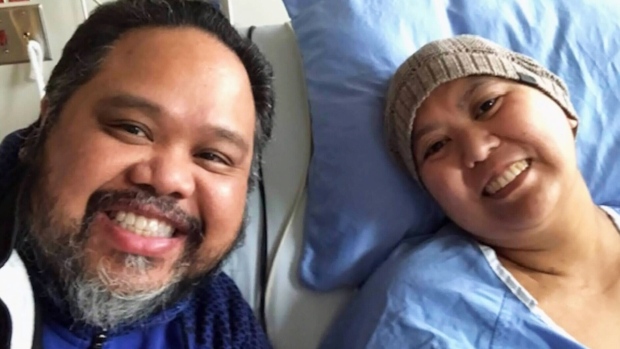 VANCOUVER — A Whistler, B.C., man is pleading with the federal government to allow his terminally ill wife a visit with her sister before she dies.

Arthur Santiago’s wife Charie has Stage 4 cancer and has been told she may not have much time left to live. But a request to allow the 38-year-old’s sister to visit from the Philippines has been denied by Immigration Canada.

“My wife only has so much time,” he said. “I’m pretty sure anybody would want to see their family.”

Santiago said his wife’s younger sister April is also her best friend. Last year, she was able to come visit with her young daughter Sofia, with no issues. But this year, only Charie’s mother was approved to visit by the federal government.

“I don’t want to say it’s a dying wish, but it is basically,” Santiago said, fighting back tears. “Out of everything, that’s all I want for her.”

Santiago said his wife was first diagnosed two years ago, originally with ovarian cancer, and then with uterine cancer following surgery.

He said after going through chemotherapy, Charie did well for almost a year. Then, she started experiencing back pain. A CT scan found the cancer had spread.

“There was a tumour in her back, and that’s what was causing the pain,” Santiago said, and added doctors suggested radiation to shrink the growth near her spine. The treatment caused the tumour to swell initially, and it entered her spinal area, leading to emergency surgery to remove it in May.

“But it was too late, because it made her a paraplegic,” Santiago said.

While in the hospital in June, Charie was told she only had three to six months to live. She’s now at home, receiving care from Santiago and a home support team, and medication to help with pain, but her condition has been deteriorating.

“There’s a noticeable change in the last few weeks,” Santiago said, and added she’s experiencing more pain and nausea. “The tumours are very visible now on her skull, which they think is causing pressure to her brain. And that’s another fear I have…the doctors said there’s a good possibility that she might start losing her memory.”

Santiago turned to immigration consulting firm Whistler Immigration for help bringing Charie’s family members to Canada to see her, something he said they agreed to do pro bono.

On July 4, the firm sent a request to Immigration Canada, which detailed Charie’s work as a financial advisor, how she is dearly missed by coworkers and clients, and her other contributions to the community, including seasonal card-making classes and volunteer work at the tax clinic.

“She is always there for her friends and neighbours and shows her support by preparing meals, babysitting children, and consoling them during difficult times,” the letter reads. “She will be incredibly missed in the community.”

The letter also outlined plans for her family members to quarantine for 14 days with a relative in Metro Vancouver.

When the response came on July 30, only Charie’s mother was approved for travel, and was granted a temporary resident visa. She intends to travel to Canada on Thursday.

But Charie’s sister and her niece were denied. In a response letter, Immigration Canada said: “Based on our assessment of the information you provided and the information in our system, we have not found that you meet the immediate family member exemption.”

Laurie Cooper, a consultant with Whistler Immigration, said while the government’s definition of immediate family member has actually expanded slightly during the pandemic, it still does not include siblings.

“Her sister has already been to Canada. She was here last year, and she easily obtained a visa. So it’s really just because of the pandemic,” Cooper said. “In this current situation, I think we could try to have a little bit of humanity, and arrange for her sister to see Charie before she passes away.”

Cooper said they’re hoping to directly appeal to the minister for an exemption on humanitarian and compassionate grounds.

“It’s an extraordinary situation, and there really are not that many people, so it seems to me that there could be room for a little bit of flexibility on the visa,” Cooper said.

She’s also concerned that Charie may not last past the 14-day quarantine period her mother has to undertake upon arriving in Canada this week.

“It seems to me just heartbreaking that her mother could actually be in the country and Charie wouldn’t be able to see her,” Cooper said, and added she hoped there would be a way public health may allow them to see each other earlier than that.

Santiago said his mother-in-law took a COVID test in the Philippines and tested negative, and is self-isolating before her flight. He’s also concerned about the time period before she’ll be able to see her daughter.

“I’m worried, that even that might be an issue, because we just don’t know how much time is left,” he said.

Santiago said he knows they are not the only family going through a situation like this.

“I hope this could pave the way for other people, because…I just don’t think it’s right.”

CTV News has reached out to Immigration Canada. A response was not received by our story deadline Tuesday.