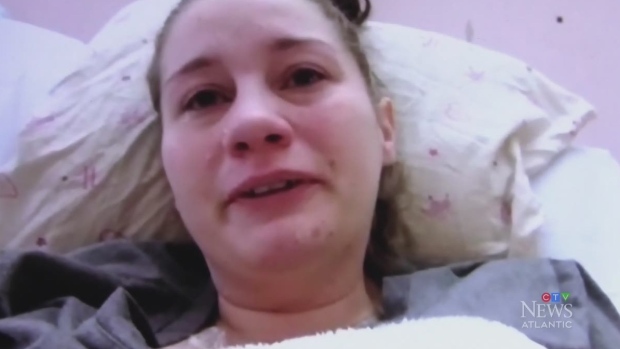 HALIFAX — Diagnosed with cystic fibrosis at age four, Nicole Turple has been in the hospital before. But after developing an infection earlier this month, the 29-year-old now finds herself in hospital in Halifax, feeling sicker than she ever has before.

Infections are a serious concern for people with CF, a fatal genetic disease that affects the lungs and digestive system.

Turple’s lung function was recently measured at 48 per cent, the lowest it’s been in months. She’s now in hospital receiving antibiotics through an IV.

“I’m just hoping that everything will work out,” she says, “and that I’ll get better and get back to where I’m supposed to be.”

That would be at home with her fiancé, family, and friends. Turple says her lung function was actually improving earlier this year, shortly after she started taking a medication called Symdeko. She received her first supply of the drug in March, given to her by the family of 23-year-old Chantelle Lindsay, who died of CF in hospital just a month before.

After using up that four-month supply, Turple’s health insurance covered the drug. But that insurance recently maxed out at its $50,000 per year limit for prescription medication coverage. Turple has three and a half days’ worth of pills left and is worried to think about what will happen when she runs out.

But speaking from her hospital bed to CTV News on Friday, Turple says what she really wants is to be able to access the new breakthrough drug, Trikafta.

Trikafta has been approved for use in a number of other countries, including the U.S. and the UK, but remains unavailable in Canada, despite CF patients and advocacy groups calling on Ottawa to fast-track its approval.

A study published in August by Dalhousie University predicts granting access to the drug in 2021 would reduce the death rate for cystic fibrosis patients by 15 per cent over ten years.

The drug has the potential to treat 90 per cent of people with cystic fibrosis. It also costs roughly US$300,000 a year.

Turple has often posted on social media calling on the federal government to make the drug accessible to CF patients in Canada.

“I just really want to get it to the right eyes,” she says with tears streaming down her face, “so the federal minister of health can see what’s happening.”

“We’re in for another fight, I think,” says Mark Lindsay. The father of Chantelle Lindsay had tried to get Trikafta for his daughter through the federal government’s special access program for compassionate use. But the request was denied just before Chantelle passed away.

Lindsay says Ottawa is taking too long to negotiate access to the drug for Canadians.

“We’ve made some progress in terms of getting loud, getting the word out there,” he says. “But it’s frustrating.”

Chris MacLeod of the Cystic Fibrosis Treatment Society says the drug is “stuck in a bureaucratic quagmire.”

He’s among many people in the cystic fibrosis community pointing the finger of blame at new proposed changes to how Canada’s Patented Medicine Prices Review Board will determine just how much a company can charge for a new patented drug.

MacLeod says the changes are unnecessarily complicating the process and keeping the drug’s manufacturer, Vertex Pharmaceuticals, from submitting Trikafta for use in Canada.

He says the Society is taking Health Canada to court in Quebec later this month as part of its fight against the legislative changes.

“Just this past week, we’ve had every CF doctor, 50, in the country, (saying),’We need these meds, stop playing politics.'”

When asked for an update on granting patients access to Trikafta in Canada, a spokesperson for Health Canada offered a written reply.

“Health Canada recognizes the importance of patient access to new therapies for serious or life-threatening conditions, such as cystic fibrosis. There are various steps involved in the regulation and reimbursement of drugs in Canada, and we are aware that this can be frustrating for families who are trying to gain access to treatments for their loved ones as quickly as possible.

While Health Canada encourages manufacturers to file drug submissions in Canada, it is ultimately up to a manufacturer to decide whether they choose to seek market authorization for their product in Canada. To date, Health Canada has not received a submission for Trikafta although the Department has been in regular contact with Vertex Pharma, the manufacturer of Trikafta, with regard to this product.”

For Turple, the wait has already been too long.

“I just want to see change,” she says, “we’ve been fighting and fighting. I voted in the election, and I expected to see some change because of that.”