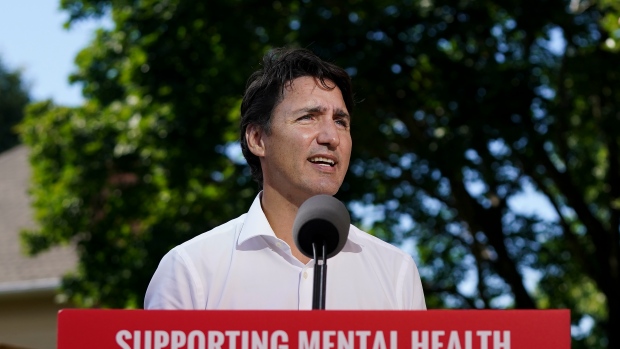 OTTAWA — Liberal Leader Justin Trudeau centred Tuesday’s campaign messaging on the party’s promise to improve access to mental health services nationwide, something his main opponents have also committed to do, citing the ongoing strain of the COVID-19 pandemic.

Trudeau unveiled the Canada Mental Health Transfer that would deliver permanent funding to participating provinces and territories to create more “high-quality, accessible, and free” services with an initial investment of $4.5 billion over five years.

“This funding, and this new transfer will mean everything from shorter wait times to more mental health professionals on the job,” said Trudeau, speaking in the Ottawa suburb of Kanata.

The Liberals are also pledging $500 million over four years to introduce a student-focused mental health fund to decrease wait times by hiring up to 1,200 new mental health care counsellors at post-secondary institutions. Ten per cent annually will go to Indigenous-governed and operated schools.

“If you’ve been in crisis and faced a waitlist, if you’re a student struggling to pay both rent and a therapist, you know there’s a lot of work still do to,” said Trudeau. “Mental health should be a priority even within our health-care system.”

The Canadian Radio-television and Telecommunications Commission is in the process of holding public consultations on the advantages and challenges associated with the implementation of a singular hotline after Parliament green-lighted a Conservative-backed motion to consolidate regional numbers.

Taking action on Canada’s mental health crisis – heightened throughout the duration of the pandemic – is a key pillar of the Conservative platform.

They, too, plan to establish an arrangement with the provinces and territories whereby a portion of the Canada Health Transfer goes directly towards improving access to mental health services.

Meanwhile the Liberals, if re-elected, will aim to include mental health as a “specific element” of occupational health and safety under the Canada Labour Code, and require federally-regulated employers to take preventative steps to address workplace stress and injury.

The NDP have promised more broadly to include some currently privatized mental health services under the umbrella of Canada’s public system.

“As a first step, a New Democrat government would bring in mental health care for uninsured Canadians – ensuring that people with no coverage for mental health services could gain access to these supports without worrying about the cost,” their platform reads.

They’d also like to establish a “national perinatal mental health strategy” to support families before and after birth but provide little detail about what that would entail.

The Green Party would look to increase funding to provinces to prioritize the expansion of mental health and rehabilitation services, redirect Health Canada’s mandate to focus on mental health and addictions, among other key items, and create an overarching national mental health strategy to address the ties between mental wellness and work productivity.

In a statement to CTVNews.ca, Margaret Eaton, the national CEO of the Canadian Mental Health Association said she’s pleased to see federal parties prioritizing mental health in the campaign.

“This has been a long time coming. People in Canada are done waiting. Done with long wait times, having to pay out-of-pocket for mental health services and limited coverage through employer insurance plans, not to mention the impact of the pandemic on our mental health,” said Eaton.

Speaking to the Liberal announcement specifically, she said the commitment to establish a new federal transfer for mental health would help fill the gaps in funding for services delivered outside the hospital and family doctors’ offices. But the question remains: how will the party keep provinces accountable for this?

“The question of course now is, how much will this transfer entail? How will it hold provinces and territories accountable to delivering mental health care where it is needed most? Our mental health system needs fixing and bold leadership from all parties is essential. We’re off to strong start with commitments from most parties at this stage of the campaign, but we need to see more discussion around the what and the how,” she said.