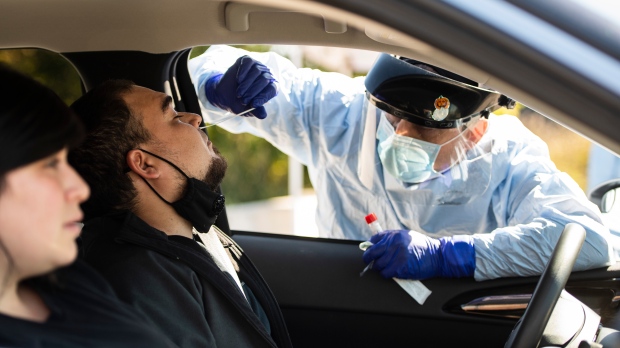 TORONTO — As COVID-19 testing numbers have increased, so too has the sentiment that the boosted swabbing capacity is the reason for the “second wave.”

Experts warn that that line of thinking, one that has been adopted by U.S. President Donald Trump, is misguided and that the “lagging indicators” of hospitalization and deaths are still to come.

“It’s a real statistic that indicates that there is a real signal of increased transmission within our community. It’s not surprising. It is obviously alarming to some who didn’t predict this happening as quickly as it has.”

But experts are not suggesting that the current wave is as bad as the first right now, said infectious disease specialist Dr. Isaac Bogoch. But we have reached a last-ditch moment.

“We’re still at a point where we can get these cases under control with targeted public health measures,” he told CTVNews.ca over the phone from Toronto General Hospital. “When case numbers rise, you start to have fewer and fewer options to get the epidemic under control.”

Despite warnings from infectious disease experts and public health officials, some social media users continue to spread false mathematics and conspiracy theories. Among the popular mantras online is “more tests mean more cases,” a similar phrase to that used by Trump earlier in the pandemic, when he suggested he would interfere with testing regimes to reduce the case count. Some of the users sharing similar thoughts have gone even further, suggesting increased testing is a means for government officials to incite fear and control.

YES, THERE ARE MORE TESTS

Though most jurisdictions are performing far more tests than they were earlier in the pandemic, the increase in testing alone doesn’t account for the increase in cases, experts stress.

In April, there were about 10,000 tests completed daily in Ontario. In September, the daily figures have been two to four times that amount.

But that comparison is not useful, said Bogoch.

“That was a time when we didn’t have very good testing capacity and people were being turned away from testing facilities and testing was largely restricted,” he said. “You have to take things with a grain of salt and look at other metrics when you’re comparing it to April.”

Now, the number of positive cases is “far more reflective” of the actual burden of disease in our communities, said Bogoch, but the testing numbers don’t explain the rise in cases. Other pandemic metrics are equally concerning.

The increased testing is providing a clearer picture of the second wave of the COVID-19 pandemic and it’s not a pleasing image. The greater testing capacity is revealing a real shift in the spread of the disease from the summer months into early fall, said Bogoch.

One key factor is the shift in demographics. In the summer months, we saw young people, largely in their 20s, making up a disproportionate number of cases. This was a trend seen in many other countries too, countries that are now seeing a shift that Canada is just getting a hint of: COVID-19 is finding its way into communities of older people again.

“It’s such a contagious infection, it doesn’t stay restricted to a particular age cohort or particular geographic location for long,” said Bogoch. “That’s exactly what happened in many parts of the world and that’s what’s starting to happen here in Canada.”

It is expected that, as older age groups contract the disease more during the second wave, that hospitalizations will go up as a result. It has been well documented that people over the age of 60 are at greater risk of more severe health consequences, including death.

Though the cases are rising, the number of deaths has remained relatively low in recent weeks. That’s because hospitalizations and deaths are what researchers call “lagging indicators,” meaning that a disease needs time to spread to enough people for the harsher consequences to materialize.

“Sadly, if we keep seeing a steady rise in cases we will ultimately see an uptick in hospitalizations and, sadly, there’s a predictable rise in deaths that will follow,” said Bogoch on CTV’s Your Morning on Tuesday. “We’re already starting to see early signs of a rise in hospitalizations in many of the provinces that are infected with these COVID-19 outbreaks.”

With each new day, public health officials across Canada announce a new set of metrics, the most prominent of which remains the number of new known cases recorded in the previous 24-hour period. On Tuesday, Canada’s largest provinces recorded more than 1,350 new cases. But some experts believe that there is an overemphasis on the daily case count and individual figures in general.

Instead, he recommends people also look at the seven-day average, and in particular the trend over time of the seven-day average. The reproduction number (also known as the “R” number) is another useful metric, which shows the number of secondary cases one infected person is likely to produce. Any R number greater than 1.0 means that an epidemic is growing in a given area. Earlier this month, Dr. Theresa Tam, Canada’s chief public health officer, warned that that number was “hovering above one” nationally.

‘IT DOESN’T HAVE WINGS’

While the pandemic appears to be changing again for the worse, the behaviour required to stop it remains the same. Canadian experts have faith that the spread of COVID-19 can be slowed.

“We did it in the spring,” said Sharkawy. “There’s absolutely no reason why we can’t do it again. We’ve just got to be motivated and support one another to make sure we get on track again.”

“This virus is insidious, but it also doesn’t have wings or feet. We are the vehicle that allows this virus to be transmitted in our gatherings, in our activities with others, especially indoors and especially in larger groups,” he said.

“When we let our guard down, the virus simply pounces and it thrives.”