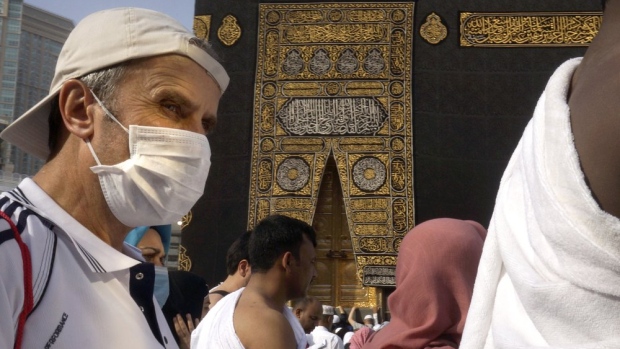 DUBAI, UNITED ARAB EMIRATES — Iran will set up checkpoints to limit travel between major cities and urged citizens on Thursday to reduce their use of paper money to fight a spreading outbreak of the new coronavirus, which has killed at least 107 people across the Islamic Republic.

The announcement in Iran came as Palestinian authorities said the storied Nativity Church in the biblical city of Bethlehem, built atop the spot where Christians believe Jesus was born, will close indefinitely later in the day over coronavirus fears. The church was expected to draw tens of thousands of visitors and worshipers next month for the upcoming Easter holiday.

These mark the latest disruptions of life across the Mideast from the new virus, which has seen over 3,740 confirmed cases.

Iran’s Health Minister Saeed Namaki announced his country’s new restrictions at a televised press conference. He added that schools and universities will remain closed through Nowruz, the Persian New Year, on March 20.

He said people should stay in their vehicles at gas stations and allow attendants to fill their gas tanks to avoid the spread of the virus.

Iran and Italy have the world’s highest death tolls outside of China.

The Palestinian Health Ministry meanwhile said it was preventing all tourists from entering the West Bank. The ministry did not specify for how long. Most tourists to the West Bank visit the biblical city of Bethlehem, where the Nativity Church is located, and Jericho.

The measures come after suspicions that four Palestinians had caught the new coronavirus. A Palestinian official said the four had tested positive for the virus but that the tests were sent to Israel to verify the results. The official spoke on condition of anonymity because he wasn’t authorized to discuss the issue with the media. They would be the Palestinian territories’ first cases if confirmed.

The Palestinian Health Ministry also said churches and places of worship in Bethlehem will be closed for two weeks.

Earlier Thursday, the United Arab Emirates warned its citizens and its foreign residents not to travel anywhere abroad amid the ongoing worldwide coronavirus outbreak, a stark warning for a country home to two major long-haul airlines.

The country’s Health and Community Protection Ministry warning comes as its capital, Abu Dhabi, sent 215 foreigners it evacuated from hard-hit Hubei in China to a quarantine set up in its Emirates Humanitarian City. They include citizens of Egypt, Sudan and Yemen.

Health officials warned that those travelling abroad could face quarantine themselves at the discretion of authorities. The UAE is home to some 9 million people, with only about 1 million estimated to be Emirati citizens.

The coronavirus outbreak has disrupted Islamic worship in the Middle East, as Saudi Arabia on Wednesday banned its citizens and other residents of the kingdom from performing the pilgrimage in Mecca, while Iran cancelled Friday prayers in major cities.