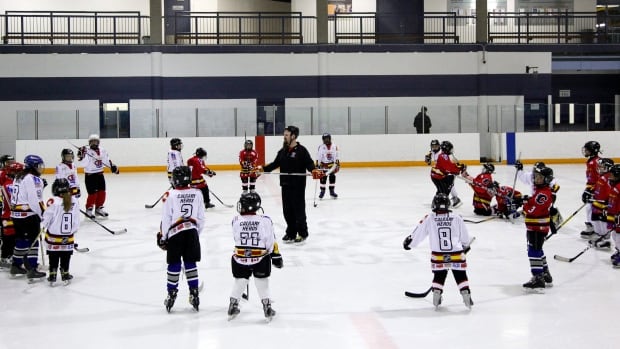 We’re breaking down what you need to know about the pandemic. Send us your questions via email at COVID@cbc.ca, and we’ll answer as many as we can. We’ll publish a selection of answers every weekday on our website, and we’re also putting some of your questions to the experts on the air during The National and on CBC News Network. So far we’ve received more than 47,000 emails from all corners of the country.

Is it safe to play hockey? Would a full-face visor protect me?

The NHL is planning to resume its pandemic-delayed season, despite players testing positive for COVID-19. But pro sports leagues aren’t the only ones itching to get back onto the ice.

We’ve received messages from rec players like Bob P. in Edmonton, who are asking whether wearing a full face visor would protect them and allow them to return to playing the sport.

The first thing to remember is that every province is in a different stage of reopening and has different rules for the number of people who can gather together. So it’s important to check your local health guidelines before playing.

Now if your region does allow it, is it actually safe?

Our experts say the answer is complicated, because hockey is a high-contact sport.

“Hockey is still tough, as there’s a lot of contact and heavy breathing,” said Dr. Zain Chagla, an infectious disease physician at St. Joseph’s Healthcare Hamilton and an associate professor of medicine at McMaster University.

Wearing a full-face visor is likely not a fool-proof way to contain droplets either.

“Even with a full visor, unless it wrapped completely around your face and neck, almost like a scuba mask, you’d still have breath coming out,” explains Chagla.

And if droplets are able to escape, it means the risk of transmission increases.

However, wearing a full-face visor is more effective in reducing the risk than half-face visors or cages, says Dr. Dominik Mertz, an associate professor at McMaster University and an infectious diseases physician and hospital epidemiologist at Hamilton Health Sciences.

An infectious disease specialist answers viewer questions about the COVID-19 pandemic, including whether masks should be made mandatory in public and if NHL hub cities would be safe. 3:59

While it doesn’t provide perfect protection, Mertz says playing hockey with a full-face shield “seems much lower risk” than other sports with similarly close contact.

Does the cooler air temperature in ice rinks preserve the virus?

Canadians like Jonathan P. are also wondering if the virus is more likely to persist in colder temperatures as opposed to warmer ones.

The answer is yes, according to our experts.

“SARS-CoV-2 appears to transmit somewhat better in a colder, drier environment,” says Dr. Gerald Evans, chair of the Division of Infectious Diseases at Queen’s University and attending physician at Kingston General Hospital. “It is quite likely that infectious viral particles will remain viable in a colder environment.”

That means surfaces in the arenas will need to be cleaned more frequently.

“It could last longer on surfaces, which reinforces the need to ensure surfaces are cleaned regularly,” said Allyson Shephard, manager or Infection Prevention and Control at CHEO, a pediatric hospital and research centre in Ottawa. “We live in Canada, so this will be important both inside and outside of ice rinks.”

But Chagla says we should keep in mind the virus typically passes from person to person through respiratory spread from our mouths, and not from the actual ice.

“If you’re still close to people’s mouths that are shedding, the temperature doesn’t matter and you’re still at risk.”

Is it safe to practise with my band if we’re two metres apart?

This question comes from Mary S., who is wondering whether it’s safe for a band to play brass and woodwind instruments together if they maintain physical distancing.

Band practice may be a bit tricky.

One of the superspreader events in the early days of the pandemic was a choir rehearsal, after which 45 members of the 56-person ensemble became infected with COVID-19. Two choir members later died.

The experts we spoke to offer some tips on how to make band practice safer if you’re going to get together to play.

Mertz says band practice is “most likely safe,” as long as you make adjustments to adhere to the provincial health guidelines.

He recommends “keeping your physical distance and avoid being in front of the source of droplets, in particular from the singer.”

“We know singing may fling droplets a bit further and with a bit of force,” he says. “So perhaps keep the vocalist out of the room, or with a mask.”

The wind and brass instruments may be less of a concern, despite the amount of spitting that is often involved in playing them.

“Most of those droplets may be trapped within the instrument rather than necessarily being a vehicle for dispersal,” says Evans, who plays in a band himself.

“However, those instruments could act as fomites for transmission and so should never be shared.”

The Ontario Music Educators’ Association has recently released a Framework for the Return to Music Classes, which includes recommendations like hand hygiene and instrument cleaning for performance-based classrooms.

All of the experts suggest playing outdoors if possible and staying the recommended two metres apart.

Again, the rules for gatherings also vary across the country, so it’s important to check your local guidelines.

Last week we answered questions about playing cards with friends.

Keep your questions coming by emailing us at COVID@cbc.ca.