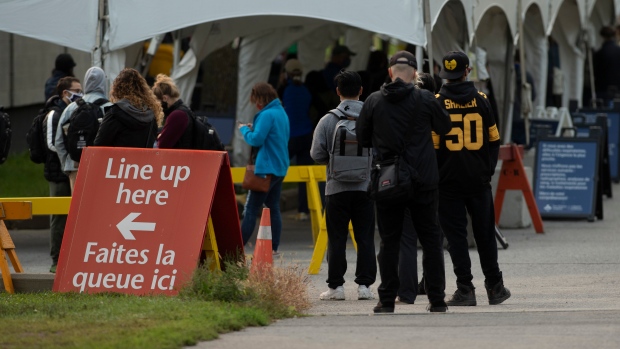 Some asymptomatic Canadians have been flocking to COVID testing centres this summer, looking to rule out the possibility they’re carrying the infection before seeing family or heading out on a weekend getaway with friends.

While it seems like a responsible move, experts say a negative result from an asymptomatic case may give people the false impression that they can’t spread the virus.

Testing negative at a certain point in time means exactly that, says virologist and University of Manitoba professor Jason Kindrachuk. So a negative result on a Tuesday doesn’t actually mean you’re clear for a Saturday party.

“The issue with this is that we know when somebody gets infected, there’s going to be a period of time until the virus actually starts to replicate,” Kindrachuk said. “We don’t know if it’s one day, two days, three days, until the virus basically gets to a high enough amount that we can use a diagnostic and get a definitive answer.”

The time frame from contracting the novel coronavirus and displaying symptoms of COVID-19 — for those who do show symptoms — can be anywhere from zero to five days or more, Kindrachuk says. And it varies from person to person.

While the current PCR diagnostic nasal swab is sensitive enough to pick up very small amounts of the virus, Kindrachuk says we’re more likely to run into false negatives if we’re testing people during that incubation period.

Theoretically, a person could test negative and develop symptoms days later, Kindrachuk says. And that could potentially lead to an infected person spreading the virus.

“Say they develop a mild symptom, are they going back to be retested?” Kindrachuk said. “Maybe they say: ‘well, I’ve already been tested and I’m negative. So this must be something else.’

“We’re not talking about drastic fevers and massive coughing fits like we see in the movies; symptoms are going to be fairly minimal in the vast majority of people. If that happens, are they going to brush that off?”

He pointed to a kids’ summer camp in Georgia, where campers and staff were required to provide negative COVID tests in the days before their arrival. The camp, which didn’t require masks and did not keep windows open to circulate air according to a CDC report, closed within days of reopening after a positive test. An outbreak of 259 more cases was later reported.

“I think there’s a lot of other factors there but it’s a great example where testing may actually falsely reassure people,” Chagla said. “They think they’re negative and can engage in higher-risk activity.”

That lesson can apply whether asymptomatic people are getting tested before going to a party with friends, or to a long-term care home to visit a grandparent, Kindrachuk said.

Safety precautions, like mask-wearing and distancing, are still needed — especially when interacting with high-risk people — rather than relying on a negative test that may have been taken during the virus’s incubation period.

Canada’s testing criteria was limited in early stages of the pandemic, partly to ensure enough supply for those most at risk of acquiring COVID-19. But some provinces began expanding criteria over the summer to include anyone who wanted a test.

Ontario and Alberta are among those that say they will test anyone worried about COVID-19 exposure, whether they have symptoms or not.

Manitoba, meanwhile, asks people to use an online self-assessment tool “to be certain they meet the necessary criteria” but says anyone with symptoms should get tested.

The B.C. Centre for Disease Control says on its website that testing is “not recommended for asymptomatic individuals,” but may be encouraged regardless of symptoms as part of an outbreak investigation.

Chagla said the original policy shift came at a time when public health officials were still trying to get a grasp on asymptomatic spread in our communities.

“It was a strategy to say ‘OK, how much is actually under the iceberg? How much of this asymptomatic disease is creeping about?” he said. “But as we discovered very few of these asymptomatic cases actually existing, especially as the prevalence started going down, the ability to find asymptomatic cases became harder and harder.”

While those with mild to no symptoms can still transmit the virus, Chagla says recent data suggest asymptomatic cases are less likely to spread COVID-19. As Kindrachuk puts it, asymptomatic transmission is “likely not what’s driving this pandemic.”

Some asymptomatic people do need to be tested, however, says Dr. Andrew Morris, a medical professor at the University of Toronto. That includes those in high-risk occupations and those who have been in close contact with a positive case.

But conserving resources — both the tests themselves and the lab work required to turn results around quickly — is something we need to be mindful of.

“I’m not saying that all people who are asymptomatic shouldn’t be tested, (only) the people with a low likelihood of having a positive test result,” Morris said. “The reality is I don’t think we have the capacity to test them.

“So we need to be really careful.”

Conserving resources could become a bigger issue in the fall and winter as cold and flu season leads to higher demands for testing. Chagla says people will “absolutely” need a test if they develop any of the multiple symptoms shared by COVID and the common cold.

But he worries the long lines at some test centres could dissuade those who need to be tested.

“Maybe they look at the line and they psychologically downplay their symptoms, saying: ‘I’m not feeling particularly unwell, it’s gonna take half a day for me to get tested, why bother?”‘ he said. “And that could trigger transmission in their communities.”

This report by The Canadian Press was first published Sept. 16, 2020.