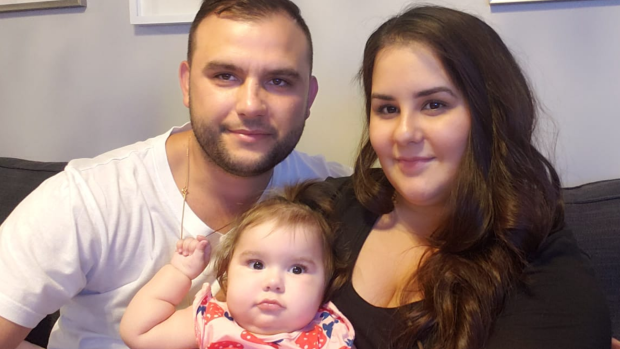 TORONTO — It’s only Eva Batista’s first birthday but for her parents, it feels like time is running out.

By Eva’s next birthday, she may have already aged out of eligibility for a life-saving drug that Ricardo and Jessica Batista are racing against the clock to pay for.

Their one-year-old daughter has spinal muscular atrophy (SMA) and needs to receive a single, one-time dose of Zolgensma before she turns two, or reaches an unspecified weight, for the drug to be effective. The rare neuromuscular disease causes muscle weakness and atrophy, impacting simple actions like Eva’s breathing, swallowing and the ability to hold her head up. Most SMA patients like Eva, who has the worst form of the disease, don’t live past the age of two.

“Some families never got the chance to celebrate their children’s first birthday with this disease. To have her here is a blessing,” her mother told CTVNews.ca over the phone late last month.

The Zolgensma gene therapy is also known as AVXS-101 and is produced by Swiss drug company Novartis, has yet to be approved by Health Canada. The drug, which is more effective the earlier it is given, replaces a defective gene that causes SMA and has been approved for use in the U.S., Japan and the European Union.

Novartis recently filed for approval in Canada earlier this year and was granted “Priority Review status,” a spokesperson told CTVNews.ca in an email. “We are committed to working collaboratively with regulatory, pricing and reimbursement authorities across Canada in providing eligible patient access to AVXS-101,” they wrote. “We are eager to finalize discussions and partner on solutions as quickly as possible.”

If approved by Health Canada, the drug would move into a second longer phase when provincial governments would assess funding for the treatment, a process that might be too lengthy for Eva.

“Unless they make an exception for her case … by the time they resolve everything it will be too late for her. That’s why we continue with the fundraising,” said Ricardo over the phone. “We can’t wait to hope that she’ll make it before the [two-year] cut-off time. If she doesn’t, she’s out of luck. We’re not leaving it to that in hopes that they’ll have consideration for her, because at the moment there hasn’t been any.”

To access Zolgensma independently costs a fortune. The gene therapy is considered the world’s most expensive drug, with a price tag of US$2.125 million. It would cost the Batista family upwards of CAD$2.8 million to buy it for Eva and have it administered in Canada. They have raised about $2.2 million and are aiming to raise $800,000 more.

But the COVID-19 pandemic has dampened their funding efforts. Most of the money raised came from large in-person events. A car show and dinner for hundreds of people pulled in more than $100,000 each in December and January alone.

An active GoFundMe campaign called “ForEva Strong” has brought in about $955,000 over the course of 10 months.

Eva is not alone in Canada. The family of an Edmonton toddler named Kaysen have been fundraising for Zolgensma all summer and have raised just over $1.1 million of a $3-million goal on GoFundMe. Kaysen turned two in July, but the family was told that there is “wiggle room” on when the drug can be administered. In Vancouver, the parents of four-month-old Lucy raised more than $2.4 million on GoFundMe in a few short months and recently announced the girl would officially be getting the drug.

BETTING ON THE LOTTERY

Other families around the world have been lucky to receive the drug for free through a lottery system offered by Novartis. In January, the drug company launched a “bi-weekly random allocation process” to provide 100 doses of Zolgensma worldwide by the end of the year.

The Batistas know of at least one Canadian family whose daughter received the drug through the Novartis lottery in April at Toronto’s Hospital for Sick Children in April. The results for that child were “amazing,” said Jessica.

“Before, she wasn’t even able to really hold her head up, she barely moved her arms, she would not move her legs at all,” she said. Within the first month or two after receiving Zolgensma, the girl gained strength, could hold up her head and was moving and lifting her legs.

“The results were huge and you could see it right away,” said Jessica.

If they win the lottery, the Batistas have received special authorization from the Canadian government to bypass the approval process and have the drug administered, but they aren’t betting on it. If Zolgensma isn’t approved before Eva turns two — or they don’t win the lottery, or they can’t raise enough money — Eva will remain on an alternative life-long therapy called Spinraza. That drug is approved in Canada and costs over $700,000 in the first year and more than $350,000 for subsequent years. While Spinraza has helped with strength and movement for Eva, who was diagnosed at just seven weeks old, her respiratory system hasn’t improved.

All signs suggest that Zolgensma would be a life-changing treatment for the Batistas, though one-year-old Eva doesn’t know anything is wrong.

“Sometimes we look at her and it kills us inside that she’s so happy and she has no idea,” Ricardo said during an emotional interview on CTV’s Your Morning earlier this year.

“She’s a beautiful little girl that always has a smile on her face.”

Her first birthday celebration Tuesday would be no exception, even if the festivities couldn’t be quite what Eva’s parents had hoped prior to the COVID-19 pandemic. But they’ll honour her strength even if it’s just the three of them.

“She deserves it for what she’s accomplished,” said Ricardo. “At the end of the day, she’s the one that fights through it. Not us.”