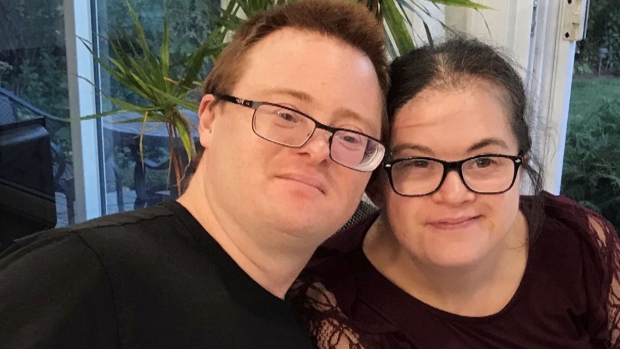 TORONTO — Two-year-old Owen Schiafone has Down syndrome, which puts him at significantly higher risk of severe illness and death if he catches COVID-19, according to several recent studies.

With many children and adults with Down syndrome in isolation for the better part of a year in addition to the increased health risks, advocates are sounding the alarm about the disproportionate impact the virus is having on the community, saying more attention and solutions are needed for this overlooked group.

“My biggest fear of COVID-19 in my son is making my son a statistic, and as a mother I will not let that happen.”

And it is not just children with Down syndrome who are vulnerable — Ellie De Sousa’s son and daughter-in-law, Michael Arruda and Melissa Mancini Arruda, both have Down syndrome.

In isolation for much of the past year, Arruda says he feels a little down and sad. Melissa wants to stay healthy and safe, and not catch the virus, but she also wants their “normal life back.”

“I want it to be over so I can see our family and our friends, so we can hug them, and we should be together,” Melissa said.

Their active social life in Georgetown, Ont. used to include lifting power weights with friends for Michael and teaching Zumba and volunteering at a daycare for Melissa. But De Sousa’s concerns about her son and daughter-in-law’s safety put those activities to an end.

“Everything just stopped, and now they’re at home all the time,” she said.

“I’m afraid of letting them out anywhere. They’re so social and even though I can preach to them and tell them you stay six feet apart … as soon as they see somebody, as soon as somebody says ‘hello,’ it’s game over. They don’t even think about the risks, they are so social that they just go towards the person.”

Alexa Rose Veit, a 15-year-old Kentucky girl with Down syndrome, survived leukemia in 2019, only to be taken by COVID-19 this past November. At first, she only showed mild symptoms, while her mother and grandparents were all hospitalized with the coronavirus. Alexa got progressively worse and was also eventually hospitalized out of state and put on a ventilator. Alexa died a day after her mother, who had also been on a ventilator, was released from the hospital to be by her side.

“They are an at-more-risk population so they have to be extra, extra careful — as if they were elderly. If they’re in their 40s they should probably behave like they’re 60, or 70 years old,” said Dusan Bogunovic with the Icahn School of Medicine at Mount Sinai, in New York City, and one of the authors of a study published in October in Genetics in Medicine that showed those with Down syndrome were more likely to contract COVID-19, were more likely to end up hospitalized, more likely to stay in the hospital longer, and were more likely to die from the disease.

A study out of the U.K. and published in Annals of Internal Medicine also showed similar results.

It is not a surprise, Bogunovic said, since individuals with Down syndrome are more susceptible to all infectious diseases — bacterial and viral, with respiratory infection still the most common cause of death. There are theories that the extra chromosomes that cause the condition could also change the body’s immune response to the virus. The blood cells that make antibodies and blood cells that fight off the virus are dysregulated in people with Down syndrome, Bogunovic explained, adding that it is an active area of research scientists are trying to better understand.

“I’m extremely afraid for Owen. He’s immune compromised … with a heart condition, he’s battled cancer, which puts him at higher risk for contracting colds, viruses,” said Schiafone, a single mother who also has a four-year-old daughter. She has worked hard to keep the virus out of their home: she follows government protocols, shops for groceries online, picks them up curbside and disinfects everything before bringing them home.

“But this keeps me awake at night. If my son were to get this virus… it would be terrible.”

“We think that individuals with Down syndrome should be one of the first groups to receive the vaccine, because they are more vulnerable than most of us,” Bogunovic said.

At the same time, many families have a wait-and-see approach to the new vaccines and are not in a rush to put their children in the first group to get inoculated. They want ways to connect without putting their loved ones at risk. But with COVID-19 cases rising to record levels across Canada following the holidays and no signs of abating, and frustrations over the slow rollout of vaccinations, the pandemic is not going away anytime soon.

“It is a constant worry. I worry about anybody coming to the door. I worry if I’m not home and they need to answer the door,” said De Sousa.

“If they do get COVID, I’m fearful that they may not recover. And if they do, I am fearful for any of the long term effects.”