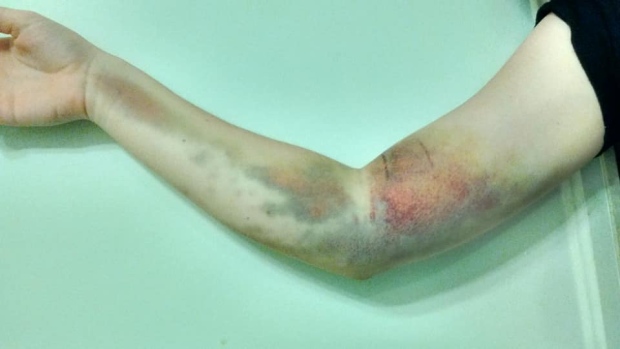 TORONTO — A young woman in Ontario claims she has been robbed of her independence and of her future since losing mobility in her arm after donating blood.

Four years ago, Gabriella Ekman visited a blood drive hosted by Canadian Blood Services so she could donate blood for the first time in her life.

“I was freshly 17. I was finally old enough to give blood. I was completely healthy. And that morning that I gave blood, my life changed as I knew it completely,” she told CTVNews.ca during a telephone interview from her home in Wasaga Beach, Ont. on Tuesday.

During the visit, Ekman recounted that the phlebotomist who drew her blood had said “whoops” when she put the needle into her arm.

She also said while they were drawing blood, the employees at the drive commented on how oxygenated her blood appeared – an indication the blood could be from an artery instead of a vein.

Blood is typically taken from a vein instead of an artery because it’s an easier and less painful process and there isn’t as much pressure in the veins, which means there’s a smaller chance of blood coming back through the tiny puncture hole from the needle before the wound has healed.

“It was about maybe 10 to 15 minutes later I started to feel that something didn’t feel right. I hadn’t given blood before, so I didn’t know what to expect,” Ekman recalled.

When she followed up with one of the women working at the drive about the discomfort she was feeling in the arm they had drawn blood from, she said she was told to go to the hospital.

At the hospital, Ekman said the doctors weren’t able to determine that anything was wrong and she was sent home.

In the following weeks, Ekman said her arm started to contract so that she couldn’t straighten it anymore and she developed bruising from her wrist to her shoulder.

“My arm was swollen. It was sore. It was bruised from top to bottom. And we knew that I needed to go back to a hospital,” she said. “By the time I returned to a hospital, I was told that we were dealing with an emergency life-saving situation.”

Ekman was referred to a vascular specialist in Barrie, Ont. who determined that she was bleeding from an artery into her arm.

“That’s when we had the confirmation that my blood draw must have come from my artery rather than my vein,” she explained.

In an emailed statement to CTVNews.ca on Tuesday, Delphine Denis, the manager of media relations for Canadian Blood Services, said because this matter is in litigation, they have only communicated with her through her legal counsel.

“We have done so, acknowledging her frustration and expressing our concern for her well-being. We are not able to comment further on the claim Ms. Ekman is advancing,” she wrote.

In Ekman’s case, the specialist performed surgery on her arm to stop the bleeding, remove a blood clot and repair the hole in her artery.

“They saved my life is how I see it,” she said. “But we noticed shortly after that, my life wasn’t about to go back to how it was before I gave blood.”

While the bleeding from her artery had stopped, Ekman said she continued to experience “indescribable pain” in her arm. She underwent several more procedures and multiple rounds of physiotherapy to improve the mobility in her arm, but nothing worked.

Ekman said doctors have diagnosed her with a form of chronic pain called Complex Regional Pain Syndrome (CRPS), which usually affects an arm or leg after a traumatic injury.

Although rare, the nerve pain disorder can persist for months or even years and can cause burning, swelling, spasms, and hypersensitivity in the affected limb.

“That contributes to my arm staying contracted. I have to wear a brace basically all the time to protect my arm as well as hold it up for me because it physically will not go straight anymore,” she said.

Due to the loss of mobility in her arm, Ekman, who is now 21 years old, said her life has been irreparably changed.

‘IT’S TAKEN AWAY MY FUTURE’

Before she donated blood, Ekman said she had big plans for her future and planned to move away for university after she received a full scholarship for secondary education through CIBC.

When she lost mobility in her arm, she said she became dependent on her mother to help her with everyday tasks, such as preparing meals and driving her places. She attended a community college nearby so she could live at home and she said she struggled with her school work because of the chronic pain she was in.

“It feels like it’s ruined my life, it’s taken away my future,” she said. “I can’t look in the mirror without thinking about how much I’ve been hurt and how my future feels like it’s being taken away from me from trying to give life to other people.”

Ekman said the injury has also taken a toll on her mental health for which she has received treatment for PTSD as well as for anxiety and depression.

The young woman said she is seeking financial compensation from Canadian Blood Services to help with her life-care costs so she won’t be dependent on her mother for the rest of her adult life. She claims the non-profit has cancelled mediation talks with her on three occasions.

While she doesn’t want to deter people from donating blood by sharing her story, Ekman said she wants people to be aware of the potential risks and she wants the organization to make things right with her.

“I believe people should donate blood. I believe giving life to someone else is such a beautiful thing. There’s a reason that I wanted to do it in the first place,” she said. “But it shouldn’t cost you everything that you have… it shouldn’t take away your independence, your confidence, it shouldn’t destroy your future.”

Delphine Denis, from Canadian Blood Services, stressed in her email that the risk of injury through blood donation is “very low” and that hundreds of thousands of Canadians donate safely every year.

“A small number of donors may suffer adverse reactions such as bruising at the needle site, feeling faint, nerve damage, arm pain or numbness,” she said. “The rate of serious adverse reaction is extremely low (less than 1 in 10,000 donations).”

For Ekman, however, she said she’s just hoping for assistance so she can adjust to her “new normal” and move on with her life.

“Obviously, nothing can make right what’s happened to me,” she said. “But an organization that relies on their donors to give life, you’d like to hope that they wouldn’t allow someone else to have theirs stripped away from them.”