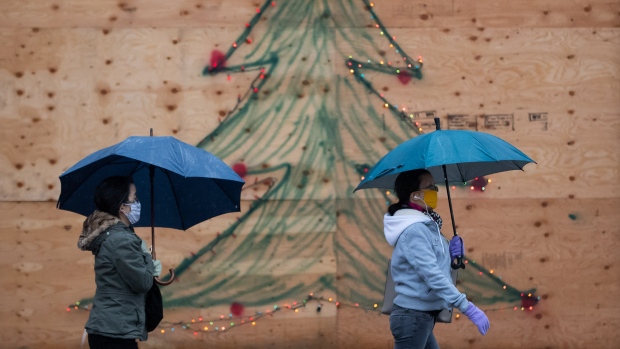 TORONTO — Canadian health experts are warning against reckless “bargaining” of pandemic precautions during a holiday season that could result in a “grotesque spike” in coronavirus infections.

Hasty quarantines and nasal swabs will do little to remove risk associated with indoor gatherings, say epidemiologists, yet many Canadians are quietly making plans to get COVID-19 tests before Christmas dinners and self-isolate in the days leading up to New Year’s Eve.

Despite lockdowns across much of the country, as many as one-third of Canadians said they planned to celebrate the seasons indoors with friends and family this month, according to an Angus Reid poll released earlier this month.

“Before the fall comes the hubris,” Dr. Colin Furness, an epidemiologist and assistant professor at the University of Toronto, told CTVNews.ca over the phone on Wednesday.

“I do think we are on the edge of a precipice,” he said, adding that experts fear Canada will see a “grotesque spike” in cases next month similar or worse than the bumps seen after Labour Day and Thanksgiving.

TOO EASY TO BREACH

Indoor gatherings this holiday season could be the main driver of a new-year spike, despite the sense of safety that individualized precautions such as a quarantine or coronavirus swab may convey. Furness says getting a COVID-19 test is a “reckless” and “selfish” use of public health resources and there are plenty of reasons for a false negative test as the swabs are just a snapshot in time. Self-isolating ahead of a gathering could work if someone does a full, zero-contact 14-day quarantine. Otherwise, shorter periods are not enough to rule out infectiousness.

There may have been room for some “risk reduction” this month, but it’s likely too late for anyone hoping to celebrate Christmas on Dec. 25, as infectious disease expert Dr. Sumon Chakrabarti has done since he was a child. This year, he’s sticking to his own household and hosting virtual festivities. While a seven- to 10-day quarantine could help mitigate the risk ahead of an indoor gathering, it’s too risky to advise, he told CTVNews.ca.

“The issue is that it’s something so difficult to do and it’s so easy to have a breach in your protocol. It could really result in spread,” he said.

A MISUSE OF AGENCY

It’s too difficult to determine whether or not the “bargains” Canadians are striking will work to prevent new infections and deaths, so they all contain some risk, said Furness, who has cancelled all three of his annual Christmas dinners this year. He knows plenty of Canadians won’t be doing the same. He sometimes feels like the “priest at the stag party” the way he suspects people conceal their holiday plans from him. But he’s been hearing a mixture of safe and unsafe ideas for the winter. He recently learned of a group of families that planned to rent an Airbnb together in the Ontario resort town Collingwood for the holidays.

“That’s really concerning, people who have the means, who have agency, who choose to flex it and engage in risky behaviours,” he said. Furness divides the world into two categories: people with the means to practice safe health precautions and people without, such as essential workers and people who live in poverty and poor housing. Those who have the means to be safe and choose not to are “contributing to a really racist problem,” he added.

But Furness acknowledges the mental health consequences of the pandemic and the thirst for human contact this month.

“I’m not a reptile. We all need friends and family,” he said. “Like no other year in my life, we need that this year. But it’s something, unfortunately, that we just can’t have.

While public health measures to curb more infections and deaths from the novel coronavirus are vital, it’s also important to acknowledge that this year has been difficult and Canadians are craving human connection, said Dr. Roger McIntyre, a psychiatry and pharmacology professor at the University of Toronto. The COVID-19 pandemic was actually preceded by a separate pandemic of loneliness that has been exacerbated this year, he added.

“One of the most effective ways to cope is to be with people, but we’re being told to shelter in place,” he told CTVNews.ca over the phone on Wednesday. “There is an accumulation affect as we are exposed to more and more stressful losses and we don’t have that cushion to fall back on.”

Virtual gatherings this holiday season can act as a “bridge” for those struggling, but for some Canadians it’s clear that that won’t be enough. As a clinical psychiatrist McIntyre has heard from patients and elsewhere that people are trying to “stickhandle around” public health guidelines and their own instincts and desires.

Instead of flouting safety precautions, consider taking a note from Canada’s military men and women, suggests McIntyre. He grew up in Nova Scotia, where he first noticed generations of Royal Canadian Navy members leaving for the holidays and returning in the spring or later when they would celebrate a “deferred” Christmas.

“That really was very positive for them. There’s nothing magical about the calendar [date] of Dec. 25 if Christmas is your thing,” he said. “I’ve seen this work, this notion of deferral of celebration is not some kind of theoretical issue. Canadians have been doing this for decades.”

Maybe the deferred celebration will be Canada Day 2021, suggests Furness. By then, there will likely be multiple COVID-19 vaccines on the market, a large amount of vulnerable Canadians will have been immunized already and the economy could start to reopen again.

“We’re going to have an ugly winter,” said Furness. “It feels to me like we’re going to have a lot of reason to be very celebratory next summer. I feel like Canada Day is going to be a really happy time. A summer solstice, rather than a winter solstice sounds like a fantastic idea. I would provisionally sign up for that.”