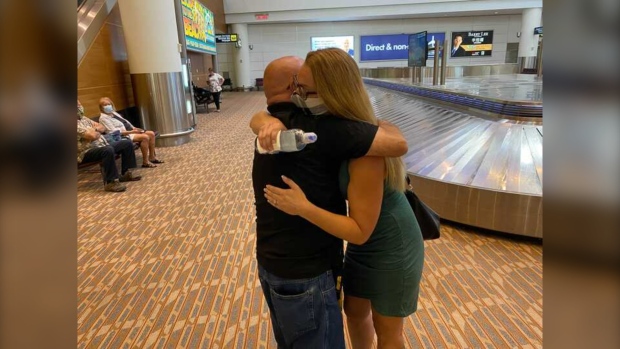 WINNIPEG — A Winnipeg woman waited 32 years, but she was finally able to meet the man who received her brother’s heart as part of an organ transplant.

In 1989, Susanne Hickey’s brother Lee died after a serious accident and his heart was donated to Dan Kobylka.

“This was kind of the only other options, I guess, was to have him carry on by helping other people carry on. So my parents at the time are the ones that made the choice to have him donate his organs,” said Hickey.

She said Kobylka and her family connected online a few years ago and have been keeping in touch over that time.

Hickey said her family decided to invite Kobylka to Winnipeg for the weekend as they are holding a family event and felt he should be a part of it.

“Its been a whirlwind. I’ve been in tears on and off knowing this whole thing has been happening and coming up,” said Hickey.

Finally, the time came on Thursday as Kobylka flew in from Toronto. Hickey picked him up at Winnipeg’s airport.

After Kobylka came down the escalator, the pair embraced, sharing a few tears and laughs as well.

“For the first time I feel like Lee’s not my donor. I’m his recipient and that means a lot to me,” said Kobylka.

He originally required the heart transplant as he suffered from dilated cardiomyopathy—a genetic disease in his family—that causes the heart to grow too big and stop working.

After hugging Hickey, Kobylka pulled out a bag of letters from his friends and family, as well as the adult baseball team that he coaches, all of which thanked Hickey and her family for saving his life.

He called this meeting with Hickey rare, noting not many organ recipients get to meet the donor’s family.

“I’m excited and I’m really nervous. Like heart transplants are not new for me but meeting a donor family is new. That’s virgin territory. I’m very nervous. I want to do everything right this weekend,” said Kobylka.

Both Kobylka and Hickey hope this meeting shows others across the country how important it is to be an organ donor and what it can provide for others.

“What’s there to think about? If you can donate it, donate it. You know, if somebody’s life can continue on, help that happen,” said Hickey.

Kobylka has been calling Hickey and her family his donor’s family ever since he received the heart transplant. He hopes by the end of the weekend he can drop the word donor and just call them his family.