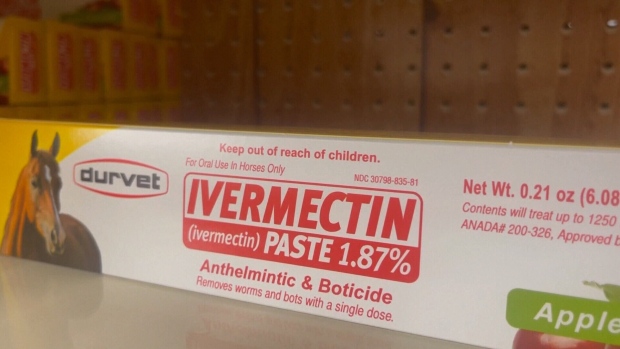 BUTLER COUNTY, OHIO — An Ohio county judge has denied a preliminary injunction request that would have ordered West Chester hospital to treat a COVID-19 patient with Ivermectin, despite a CDC warning against it.

Butler County Judge Michael Oster issued the ruling Monday, saying while it is impossible not to feel sympathetic toward the patient and his family, the court made the decision in accordance with Ohio law.

The case has made national headlines. A COVID-19 patient’s wife wants her husband to be treated with Ivermectin, despite a CDC warning against it.

Jeffrey Smith, 51, of Fairfield Township, is in the intensive care unit at the University of Cincinnati West Chester Hospital.

Smith was diagnosed with COVID-19 on July 9. He was admitted into the hospital six days later and has been on a ventilator for more than 30 days.

His wife, Julie Smith, wanted him to be treated with the controversial drug.

Ivermectin is mainly used in the United States to treat or prevent parasites in animals. It has also been used to treat humans, approved by the FDA to treat people with intestinal strongyloidiasis and onchocerciasis, two conditions caused by parasitic worms.

The Centers for Disease Control and Prevention has warned against using ivermectin as a treatment for COVID-19, saying it’s not an anti-viral drug and could be dangerous when not used properly.

Doctors at the hospital refused to treat Jeffrey Smith with the drug.

Last month, Julie Smith got a temporary order from Butler County Common Pleas Judge Gregory Howard. He ordered doctors to administer the drug, but that order only lasted 14 days.

Last week, Julie Smith and attorneys for UC West Chester returned to court to argue the case again — this time in front of Judge Oster.

Julie Smith said despite her husband being treated with Remdesivir, steroids and plasma, his condition continued to decline. She said she read articles in other cases where COVID-19 patients’ conditions reportedly improved after being given Ivermectin.

“It just gave me hope there was something to try, that I didn’t just have to sit there and let him die. That I could fight,” Julie Smith said.

But even after getting the prescription, doctors and UC West Chester refused to treat Jeffrey Smith with Ivermectin. They only did so after they were court-ordered, but since it was a temporary order, the case was back in court.

“While the case at bar has emotion to it, the following decision will be strictly based upon the standards of law on a preliminary injunction case,” the ruling stated. “As such, public policy would not favor the granting of the injunction by clear and convincing evidence.”

Oster detailed in his ruling that while the court is sympathetic toward the Smiths, “public policy should not and does not support allowing a physician to try ‘any’ type of treatment on human beings. Rather, public policy supports the safe and effected development of medications and medical practices. A clinical trial would be one such method of a developmental process. However, a clinical trial is not at issue in this case.”

Oster went on to say that no strong evidence by any study has shown that Ivermectin should be recommended for a COVID-19 patient and based on current evidence, the drug is not an effective treatment. Oster said that even Wagshul could not say that continued use would benefit Smith.

Oster said Smith can be safely moved to a hospital where Wagshul has privileges if continued use of Ivermectin is desired.

UC Health issued the following statement on the ruling:

This news, while positive in support of respect for science and the expertise of medical professionals, does not change the fact that there are many people suffering from COVID-19 in our communities. We implore all members of the community to do what we know works: wear a mask, become fully vaccinated and use social distancing whenever possible.”

Attorneys for the Smiths argued Ivermectin appears to be working on Jeffrey Smith.

Attorneys for the hospital claim that there has not been a notable improvement since the treatment began.