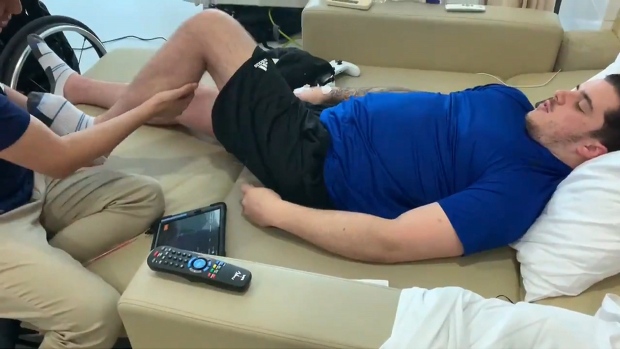 CALGARY — A hockey player paralyzed in the Humboldt Broncos bus crash says it feels good to be home after spending five weeks in Thailand, where he underwent spinal surgery.

“It feels good. I mean I felt that cold, cold wind hit my legs, so I’m feeling good. It’s good to be back,” Ryan Straschnitzki said Sunday night as he wheeled himself into the Calgary airport.

The 20-year-old from Airdrie, Alta., who is paralyzed from the chest down, had an epidural stimulator implanted in his spine while he was in Bangkok. A week later, doctors also injected stem cells above and below his spinal injury to try to reverse some of the damage.

In another clip, while he’s strapped into a harness, physiotherapists slowly help him walk with a wheeled machine.

“It was incredible. I mean the last time I walked beside my dad was before the accident and before I moved away,” said Straschnitzki. “So doing that again and just seeing the look in his eyes is motivating to me.”

Straschnitzki was one of 13 players injured when a semi truck blew through a stop sign and into the path of his junior hockey team’s bus at a rural intersection in Saskatchewan in April 2018.

Sixteen others on the bus were killed.

Tom Straschnitzki said he’s not an emotional guy, but watching the progress his son made in Thailand has given him hope.

“When I actually saw him move his leg, it just took me back to imagining his last steps going onto that bus on that fateful day. And I was just thinking maybe he can go back on the bus one day,” he said.

The surgery can cost up to $100,000 but isn’t covered by public health care or insurance, because it has not been approved by Health Canada. The Straschnitzkis say they’re frustrated the treatment isn’t available here.

Ryan Straschnitzki hopes his experience might at least get the conversation going.

“Our health-care system is kind of lacking in this area for spinal cord injuries and I think it’s huge that Thailand and some other places are getting this started,” he said.

“I think if Canada can step in and advance this program, I think it’ll help a lot of people out.”

Tom and Michelle Straschnitzki said they have been flooded with comments and questions about their son’s procedure.

“They want to try it and ask why doesn’t Canada do it? I don’t have the answer about Canada but they do it in Thailand and it is not experimental,” said Tom Straschnitzki.

Health Canada has said it provides licensed spinal cord stimulators but only for pain relief. A spokesman said it has not received an application to have stimulators used to regain motor skills.

Ryan Straschnitzki said he isn’t expecting a cure but hopes his implant will restore some muscle movement.

“Just getting that feeling of being able to move something that I wasn’t able to move before — and I know core is a huge part of my disability, so anything below my chest is crucial. And after the programming it really helped,” he said.

Straschnitzki is hoping to make the Canadian sledge hockey team and compete in the Olympics. He even took his sled with him to Thailand and sat in it as part of his rehabilitation there.

He said he plants to take a few days off before returning to physiotherapy and hitting the ice again back home.

This report by The Canadian Press was first published Dec. 9, 2019.