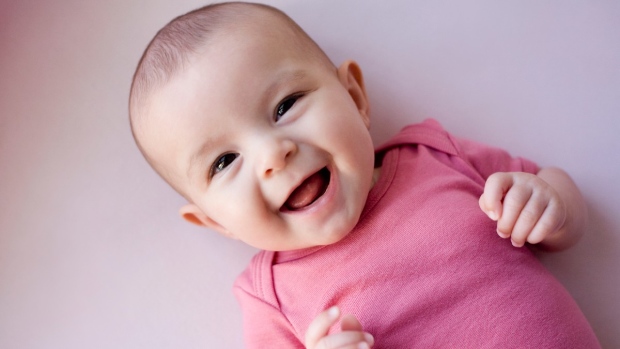 Laughter transcends all languages — and now scientists know this spontaneous response is universal across some primate species, too.

The laughing patterns of human infants match those of great apes, according to a study published Tuesday in Biology Letters.

Human adults primarily laugh while exhaling, whereas infants and great apes laugh during both inhalation and exhalation, said study author Mariska Kret, associate professor of cognitive psychology at Leiden University in the Netherlands.

“The ape-type is more difficult to describe but there is an alternation huh-ha-huh-ha,” she added.

Infant laughter isn’t necessarily similar to that of all species of great apes, just those that are evolutionarily closest to human — such as chimpanzees and bonobos, said Marina Davila-Ross, a reader in comparative psychology at the University of Portsmouth in England, who was not involved in the study.

“It seems to reflect that laughter is to some extent biologically deeply grounded,” she said.

Kret originally discovered this phenomenon while attending a talk by renowned primatologist Jan van Hooff with a friend. When van Hooff said apes laugh during inhalation and exhalation, Kret’s friend showed a video of her baby laughing in the same manner.

To test whether infants laugh like apes, Kret collected audio clips of humans ages 3 months to 18 months old laughing and asked listeners to rate what percentage of the laugh was produced by inhaling versus exhaling.

After two rounds including at least 100 listeners each, the results were in. People could tell that infants laughed both while inhaling and exhaling, whereas adults mainly laughed by exhaling.

To ensure the results were accurate, Kret had expert listeners analyze the sound bites, and their findings aligned with those of the novices.

Researchers also had the listeners rate which sounds were the most pleasant and contagious.

The results showed the more that the laughter was produced by exhaling, the more people perceived it as positive.

Researchers confirmed this finding when they conducted another experiment and asked a new group of listeners to rate how positively they perceived the laughter without being informed of breathing patterns. The new group also found exhaling laughter to be more pleasant.

Laughter produced by exhaling tends to be louder and more controlled, Kret noted, which she said makes it easier for infants to communicate that they are having fun and want to continue playing.

Older infants in the study also produced more exhaling laughter than younger ones.

This could be because, as babies grow up, they learn “the communicative function of it, and parents see that the baby is actively trying to make something clear,” Kret said.

Davila-Ross said she was surprised to see that the airflow associated with the laughter changes as the infants grew older.

“It would actually be very interesting to see if such changes can also be found for other nonverbal vocalizations of humans,” she added.

In future research, Kret said she hopes to repeat her experiment with other vocalizations such as crying.

She is currently running other laughter experiments, including one involving orangutans, gorillas and humans to see whether they change the sound of their laughter to mimic the laughter of those around them.