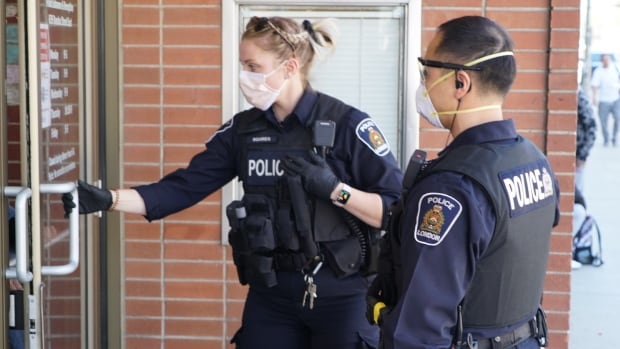 A group of legal and civil liberty organizations is looking to challenge an Ontario law that allows personal information about people with COVID-19 to be shared with police.

The province in April issued an emergency order allowing police, firefighters and paramedics to access what it called “critical information” about people confirmed to be infected.

“Sharing COVID test results with police is not necessary, and in fact undermines an effective public health approach to this pandemic,” said Abby Deshman, director of the CCLA’s criminal justice program, in a statement.

Under the Emergency Management and Civil Protection Act, first responders are allowed to obtain the names, addresses and dates of birth of Ontarians who have tested positive for the coronavirus.

The move was meant “to protect Ontario’s first responders and stop the spread of COVID-19,” the province said at the time.

“Strict protocols will be enforced to limit access to this information,” and first responders will no longer have access to the data after the emergency declaration is lifted, the province said.

A spokesperson for the Office of the Solicitor General confirmed the province was served with the paperwork for the challenge on July 7.

“As this matter is subject to litigation, it would be inappropriate to comment further,” the office said.

No other jurisdictions in Canada have emergency orders like Ontario’s, according to the CCLA.

Alberta has allowed individual COVID-19 test results to be provided to police if a person had deliberately put an officer at risk by coughing, sneezing or spitting on them.

“But that is much narrower scope than the one put in place in Ontario,” Deshman said in an email to CBC News.

The CCLA is joined in the challenge by Aboriginal Legal Services (ALS), the Black Legal Action Centre (BLAC) and the HIV & AIDS Legal Clinic Ontario (HALCO) — all of which say sharing health information stands to further strain the relationship between police and their communities.

“The fact that personal health information is now being needlessly shared with the police is deeply concerning to Black communities across the province,” said BLAC executive director Ruth Goba, citing the recent practice of carding, which allowed the police to collect personal information about the public until 2017, when it was banned.

The groups say they wrote to the solicitor general about their concerns in April. To date, no response has been received, according the CCLA.