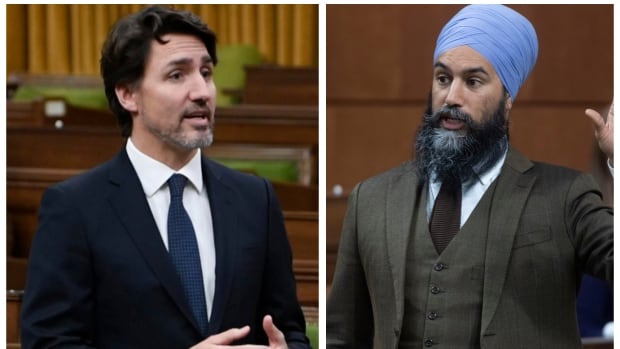 The Liberals and NDP have reached a deal on sick leave, clearing the way for New Democrats to support the throne speech and bypass a fall election, sources tell CBC News.

Ahead of Wednesday’s speech from the throne, NDP Leader Jagmeet Singh said his party would need to see the Canada emergency response benefit (CERB) extended and paid sick leave offered to every employee across the country to ensure no Canadian has to go to work sick.

Sources say Bill C-2 — the proposed legislation that would transition people from the Canada emergency response benefit (CERB) to an employment insurance program with expanded eligibility, or to one of three new recovery benefits — will be amended to expand eligibility for sick leave.

The Conservatives said flatly they won’t support the throne speech, while the Bloc Québécois said it won’t support it unless the government boosts health care transfers to the provinces with no strings attached.

That left the NDP as the minority Liberals’ best shot of securing enough votes to pass the confidence vote on the throne speech and avoid a snap election.

Singh has long signaled that he wanted to see the government follow through on its promise to provide a 10-day national sick leave benefit and ensure that no one loses out during the transition from CERB to EI, or to other recovery benefit programs.