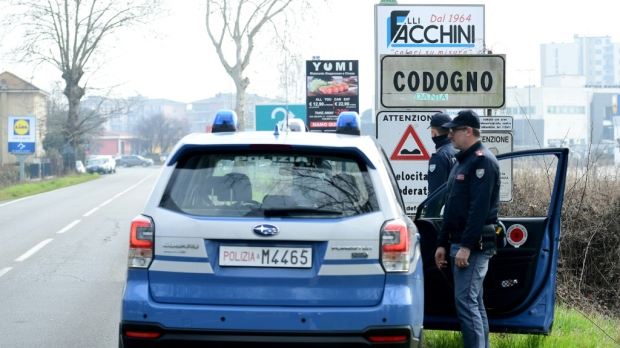 CASTIGLIONE D’ADDA, ITALY — In one Italian village under coronavirus quarantine, an unassuming bus stop bench has become a lifeline.

Residents of Castiglione d’Adda head daily to the bench, where those on the outside drop off money, groceries, cigarettes or documents — whatever needed for those unfortunate enough to be stuck inside.

After five days, locals in this “red zone” and others like it under quarantine in Italy’s north have organised new ways of getting by.

The new hubs are centred around the 35 checkpoints dotting the Lombardy plain, surrounding ten towns and villages, containing several tens of thousands of people and guarded by about 400 soldiers and police.

An eleventh quarantined area is located in the neighbouring region of Veneto.

One man, Salvatore, dressed in cycling gear, waits by the Castiglione d’Adda bus stop bench while joking with soldiers guarding the periphery of the quarantined area.

“I’m waiting for my colleagues in Lodi who are going to bring me cigarettes,” said Salvatore. “In the red zone, apart from food shops and newsstands, everything is closed.”

Soon thereafter, his friends arrive for the handover, placing the cigarettes on the bus shelter bench, making sure to keep the regulatory distance of several meters between Salvatore inside the red zone and themselves outside.

Once departed, Salvatore makes his way to the bench to pick up the cigarettes.

All morning the scene is repeated.

One woman comes to bring provisions to her sister-in-law, leaving with a cheery “Good day to all!” to the soldiers.

A vet collects medicine for his cattle. An accountant drops off his bills and taxes to be paid in Lodi, 20 kilometres (12 miles) away.

Others come just to chat and joke with the soldiers and breathe a bit of life from the outside.

Because after the adrenalin created by the exceptional situation has subsided, there’s nothing much to do.

Under the radiant sun, families are walking together, cyclists are out for a spin and joggers run past.

“There’s nothing else to do,” said Pietro Mola, a young accountant who came to the checkpoint to entrust his bills to friends.

“Luckily, we’re not confined to our own house.”

Despite the fresh air and time for exercise, the worry is growing over the economic fallout of the virus, he said.

Mola works for various companies — from restaurants to tattoo artists — all within the red zone. All are closed and the quarantine still has 10 days to go.

“It’s a chain. If they don’t win, I don’t win,” Mola said. “The companies that don’t have a strong backbone are not going to make it.”