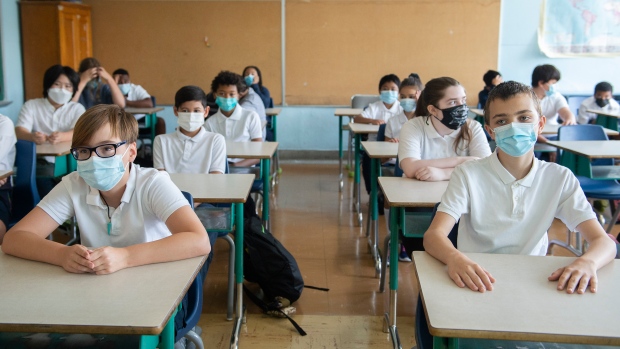 Quebec is preparing to lift mask mandates in school classrooms for all grades as COVID-19 hospitalizations continue to decline. But one expert is questioning the value of dropping these measures.

Starting March 7, Quebec students will no longer be required to wear a face mask while sitting in a classroom. However, masks will still be required in common areas, such as hallways and on school buses.

“When you’re talking about reopening bars, gyms, other businesses, the argument that’s put forth is an economic one. There is an economic hardship that is endured when these things stay closed for extended periods of time,” Labos told CTV News Channel on Wednesday.

“When it comes to masks, there’s no economic downside. There are no health concerns,” he continued. “There’s no real negative aspect of this apart from the fact that some people just don’t like wearing masks for emotional reasons or political reasons.”

Labos questioned why the province is still making masks mandatory in common areas if they won’t be required in classrooms.

“You don’t have to wear the mask in class, but you have to wear one when you’re in the hallway. Like, what does that actually accomplish? Scientifically, that doesn’t actually make sense,” he said.

In a statement to CTV News Montreal, Quebec Education Minister Jean-François Roberge said on Tuesday that easing the mask mandate was “one more step to regain the pleasure of being at school, to regain the pleasure of teaching.” Quebec Premier François Legault also cited the decreasing rate of COVID-19-related absences in schools while speaking to reporters in Quebec City on Tuesday.

However, Labos noted that the air quality in classrooms remains poor, given the ongoing lack of HEPA air filters in classrooms, and many children between five and 11 have yet to be fully vaccinated. According to the Public Health Agency of Canada, only 62 per cent of Quebec children have received their first dose and 37 per cent have received two doses.

“If the government had used this time to, you know, radically update the infrastructure and there were air filters in every classroom … and the vaccination rate was near complete for this entire age group, I would have said, ‘OK, maybe that’s a little bit more justifiable,'” Labos said.

This isn’t the first time Quebec has lifted its school mask mandates during the pandemic. Last November, the province announced that high school students would no longer be required to wear masks in the classroom, although the mask mandate was reintroduced in the new year after the rise of the Omicron variant of COVID-19.

With the lifting of the mask mandates, Labos said he expects to see more COVID-19 cases and deaths, as well as more spread of other respiratory viruses like the flu.

“When you’re wearing a mask, you prevent transmission. So, if we do this, we have to prepare ourselves for the fact that there is going to be more spread,” he said. “Maybe we’re prepared to tolerate that. But I don’t know if people have fully appreciated what the impact of this is going to be.”

Quebec isn’t the first province to ease classroom mask mandates. The Alberta government lifted its mask mandates in classrooms on Feb. 14. In addition, Ontario’s Chief Medical Officer of Health has said his team will be reviewing the masking requirements in public spaces, including schools, with a decision on the matter expected sometime in March.

With files from CTV News Montreal.