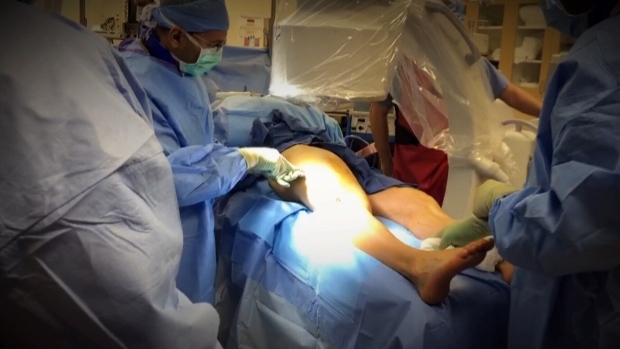 TORONTO — At 5’11”, Alfonso Flores was already reasonably tall, but the 29-year-old Dallas, Texas native was not satisfied with the way his legs looked. So this past May, he made a decision to try something more radical: limb-lengthening surgery.

“I felt great about (my height). I just thought that I could enhance my quality of life, just a little bit more if I got a couple more inches,” Flores said.

“Whenever I looked at my legs in the mirror, it looked like my femurs [thigh bones] were a little bit shorter than my tibias [lower leg bone].”

He liked the look of longer legs and figured the surgery might make his femurs look better — he was right, he said. Adding an extra three inches of height is worth it for patients like Flores, and he is not alone.

It’s an increasingly popular type of cosmetic surgery, according to Dr. Kevin Debiparshad, a Canadian orthopedic surgeon who works in Las Vegas, and is the chief executive of a private clinic that specializes in cosmetic limb lengthening.

The number of patients coming into the clinic to pursue limb lengthening has doubled every year, Debiparshad said, with roughly 90 per cent of the inquiries coming from men. Last month alone, the clinic conducted roughly 20 to 30 consultations and seven surgical procedures, he said.

CUTTING AND GROWING THE LEG BONES

To get those extra inches, doctor make four to six incisions in the thigh.

They separate the bone through the small incisions and place an implant into the bone’s hollow centre, and lock it into place.

At home, the patient controls the implant with an external remote control device. With the click of a button, the implant slowly stretches the bones. Once the desired length and height is achieved, the lengthening phase is stopped and the bone begins to regenerate.

Despite the alarming imagery of multiple cuts into leg bones, Dr. Debiparshad said it is in fact a minimally invasive surgery.

“The surgery itself takes about an hour and a half to complete. Patients are generally walking the same day, and using walking aid.”

According to Debiparshad, there is surprisingly little pain when the patient wakes up. It is the first few weeks after that are considered the most difficult. There is tenderness and soreness, and inflammation in the legs that can be uncomfortable.

“It also requires work on the patient’s behalf to go through the rehabilitation and the physical therapy,” he said.

A Canadian woman recently flew to Las Vegas to undergo the procedure to add three inches to her natural height. She wished to remain anonymous, but described the pain as mostly muscle soreness.

“Originally, of course it’s acute surgical pain where you have a fracture, and it’s kind of like a bony pain. But now it’s more so like, just some muscle pain.”

CONTROVERSY AND THE PSYCHOLOGY OF HEIGHT

Research over the years have shown that tall people make more money, have more confidence, and are considered more attractive. Taller men, for example, tend to have higher self-esteem and are happier. One study found that shorter people had a more negative view of themselves and perceived the world around them with more mistrust. Shorter men and women tend to be more dissatisfied with their height. And in Western countries, a four- or five-inch difference in height means a salary difference of 9 to 15 per cent, according to at least one study.

All of these insecurities and societal perceptions played into the Canadian patient’s decision to undergo the procedure. She was tired of people noticing and commenting on how short she was when she took off her heels.

“I always felt like height was probably the one thing I would change if I could change something about myself,” she said, describing it as one of the most insecure things she felt about herself.

“It’s difficult being short in society. I feel like there’s power differences and also, even if you are a female. I feel like there’s still like you’re looked down upon if you’re shorter…And in terms of appearance, for females to be taller I think is also more desirable.”

A SMALL PRICE TO PAY?

“But then I started doing both and the patients are so happy and they do well, and so it kind of encouraged me to keep going with it.”

Gdalevitch said newer technology has resulted in fewer complications and less pain, and she hopes to raise awareness and educate other doctors.

Her one concerns is that she has fixed botched surgeries on patients who went abroad to get it done at a cheaper price.

“It is dangerous in the wrong hands,” she said.

Other doctors say limb lengthening was never designed to be a cosmetic procedure.

“The reasons to consider a limb-lengthening surgery, would be unequal leg lengths, causing a gait disturbance, back, hip, or leg pain,” said Dr. Carrie Kollias, a Canadian doctor who now practices in Melbourne, Australia.

And there are risks as well, including fractures, deformity, chronic pain, nerve injury, blood vessel injury, and bone infection.

“These are significant complications not to be taken lightly. And certainly for patients entertaining doing this for cosmetic reasons this is a major concern for me,” Kollias said.

“None of us are immune from complications. You can be the most compliant patient and the most gifted surgeon in the world, and you may still get a complication.”

But for those who have undergone the process, they say the risks, the cost and the pain are a small price to pay for what they gained.

“I’m much happier and I no longer have those insecurities that I had before,” said the Canadian woman.

Flores has no regrets either, and no pain. He now stands over six feet tall.

“If you could have just a little bit of discomfort for a life time of happiness, I think this surgery is for you and totally, totally worth it.”