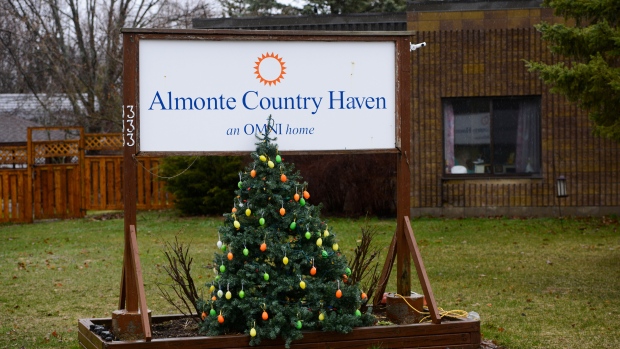 TORONTO — As the fourth wave continues across Canada and community spread climbs, outbreaks are also on the rise inside Canada’s long-term care homes, leading experts to stress the importance of staff being vaccinated — an issue which varies province to province.

While many provinces are introducing vaccine mandates for health-care workers and other staff at long-term care homes, other regions are allowing unvaccinated workers to continue working if they get tested regularly, or, in Ontario’s case, provide proof that they’ve watched an educational video.

Ontario’s Long-term Care Minister Rod Phillips said in a news conference Thursday that the province will soon be publicizing the vaccination rates in nursing homes across Ontario, but stopped short of promising a vaccine mandate for workers.

“It reminds us how vulnerable this population remains, because while we’ll say, ‘wow, you know, almost a hundred per cent of long-term care residents across Canada are vaccinated,’ we’re having outbreaks in these homes,” Dr. Samir Sinha, an expert in geriatrics, told CTVNews.ca in a phone interview.

“These residents are still getting sick, they’re still dying.”

After residents began to receive vaccines in the winter, the number of outbreaks — which reached a peak of 1,000 in long-term care nationally in January, Sinha said — plummeted, showing the positive impact of the vaccine.

But in this fourth wave, as the more transmissible Delta variant takes hold, long-term care is once again seeing an uptick in outbreaks.

According to a tracker of outbreaks in long-term care and retirement homes put together by the National Institute of Aging (NIA), more than 200 facilities across Canada are currently experiencing outbreaks — though it’s important to note that what constitutes an outbreak may be, in some cases, just a handful of cases.

Even a small outbreak can throw a care home into full or partial lockdown, cutting down on essential visits from family.

Regardless of the size of outbreaks, the number of them is clearly increasing quickly during this fourth wave, Sinha said. Earlier in the summer, there were only around 10 homes with outbreaks across all of Canada, he explained.

“This is growing at a rapid, rapid pace, and in particular it’s occurring in places where there is significant community spread,” Sinha said.

“One of the ongoing challenges though has been that we see periodic outbreaks that have been occurring in homes where there is still a significant portion of the staff who have not gotten vaccinated.”

In August, families of residents at an Toronto nursing home that was in the middle of an outbreak told CTV News that they were shocked that workers did not have to be vaccinated. Families had found out during a board meeting in July that the vaccination rate among staff was only 37 per cent.

Eight residents have died at Hillsdale Estates in Oshawa, where the first positive test came from a staff member, whose infection in late August was discovered through daily screening.

According to provincial data, there are currently 13 outbreaks in long-term care facilities in Ontario.

Earlier this month, outbreaks at long-term care centres in the Calgary Zone in Alberta doubled over a four-day period. Alberta has the most active outbreaks in long-term care right now, Sinha said.

According to the NIA Long-Term Care COVID-19 Tracker, there are currently 104 outbreaks in Alberta long-term care and retirement homes as of Thursday, more than all other provinces combined.

The provincial data itself lists more than 100 outbreaks at long-term care and supportive living facilities, with outbreaks being classified as two or more cases.

It’s not surprising that when cases are rising across Canada, that we would see outbreaks starting to pop up in long-term care again, experts say.

Quoc Dinh Nguyen, a geriatrician and adjunct clinical professor at the University of Montreal, told CTVNews.ca in a phone interview that while it is “expected” to see cases rise in long-term care when there is community spread, it’s still concerning.

Preventing the introduction of COVID-19 into long-term care homes completely can’t be done right now, Allison McGeer, an infectious disease expert and professor at the University of Toronto, told CTVNews.ca in a phone interview.

One reason is because of the lack of widespread vaccine mandates for staff.

“There are good reasons why mandates are treacherous, but nonetheless, if you have unvaccinated staff working in long-term care, that increases risk, no question,” she said.

“We also have, and again, for good reason, allowed visitors and essential caregivers much more access to long-term care. That’s a good thing for variety reasons, but it definitely increases the risk of introduction of outbreaks into long-term care.”

Long-term care homes have very high rates of vaccination among residents, but vaccines are not infallible, Sinha explained, especially when it comes to the elderly and vulnerable. Studies have shown that these populations do not mount as strong an immune response as younger people, making it important to keep COVID-19 out of long-term care settings.

And the Delta variant only makes it harder.

McGeer said that if were infected with the original strain and the Alpha variant, “you shed less virus and you were less likely to transmit, but that is not true for Delta.” She added that “even doubly vaccinated people can transmit Delta.”

HOW PROVINCES ARE TRYING TO PROTECT LONG-TERM CARE

Ontario was one of the first regions to announce that they would be requiring care homes to have vaccine policies. But they specified that while care homes could create their own policy, the minimum requirement would allow those who are not vaccinated to either present a medical reason why, or provide proof of “completion of a COVID-19 vaccination educational session.”

“It basically is saying that they want to make sure that everybody either gets vaccinated or watches an educational video if they choose not to get vaccinated,” Sinha said. “That’s not really a true, meaningful consequence at the end of the day. We now have more than enough information to tell us that vaccines work, vaccines are incredibly safe.

“There’s no excuse why a person who chooses to work in this environment should be allowed to potentially put their residents at risk.”

Several provinces have taken the step to require health-care workers and even other employees in long-term care to be fully vaccinated.

In early August, British Columbia announced that it would be mandatory for all health-care workers in care homes to be fully vaccinated by Oct. 12.

Quebec followed suit this month, specifying that as of Oct. 15, all health and social services workers will have be fully vaccinated. The rule includes public long-term care facilities as well as private ones.

“Quebec has taken the hard line on this,” Nguyen said. “It’s actually not even only health-care workers that are facing patients, it’s every single employee of the health-care system in Quebec [that] needs to be vaccinated by Oct. 15.”

Workers who do not provide proof that they have been vaccinated by the deadline in Quebec will be reassigned to other duties if possible, or “they will not be allowed to return to work and will receive no compensation.”

“As a health-care worker, you are going to work with some people who can not get vaccinated and overall people that are at higher risk than the common lay people not at the hospital,” Nguyen said. “So I think there’s a responsibility for people to be vaccinated.”

He added that the vaccines have been proven to be safe and that we’ve vaccinated millions of people and seen only rare side-effects.

Some retirement homes are making the decision themselves. In late August, a coalition of long-term care providers announced that they would be making COVID-19 vaccines mandatory for their staff across all of their homes, saying in a press release that as of Oct. 12, unvaccinated staff would be placed on an unpaid leave of absence.

Other provinces have allowed workers the option of being tested frequently if they are not vaccinated in the hopes that if they fall ill, it will be caught by the tests before they can spread it in the long-term care home.

In Manitoba, those who work with vulnerable populations, including in long-term care settings, are required to be fully immunized or to “undergo regular COVID-19 testing.”

In New Brunswick, staff at nursing homes and adult residential facilities have to be fully vaccinated or be tested regularly for COVID-19.

And Ontario’s current policy states that workers in high-risk settings who don’t provide proof of vaccination will have to take rapid tests regularly.

McGeer said that while testing is better than nothing, it doesn’t provide the same safety as a vaccine.

“When you have a rapid test, what it tells you is that you’re not shedding lots of virus at this moment — doesn’t mean that eight hours from now, end of your shift, that you’re not,” she said.

“There is a potential risk that a person who is positive will test negative,” he said. “And then you only detect it […] the next day or the day after, for example. And by that point, the damage has already been done.”

In Nova Scotia, there have been increasing calls for a vaccine mandate for health-care workers.

On Wednesday, Newfoundland and Labrador’s acting Chief Medical Officer of Health Dr. Rosann Seviour told reporters that while they are discussing the idea of requiring vaccinations for health-care and long-term care workers, “there’s no announcement imminent.”

Currently, Newfoundland and Labrador is experiencing an outbreak on the Baie Verte peninsula, which began at a personal care home. The home is linked to 17 infections, officials have said.

THE QUESTION OF THIRD SHOTS

Vaccine mandates aren’t the only tool being considered to keep long-term care residents protected from COVID-19.

Ontario, Alberta and Saskatchewan have announced that they will be providing booster shots to certain high-risk groups, including residents of long-term care.

Currently, the National Advisory Committee on Immunization only recommends third shots for those who are immunocompromised.

It’s something that we should look into further, Nguyen said, adding that Quebec, where he lives, has not introduced third shots for long-term care.

He acknowledged that the World Health Organization has said that other countries should receive more first doses before high-income countries start giving out third doses to their citizens, and that the equity question is difficult.

“On the individual level, I think the benefits of giving a third dose for folks that are old and especially those that are vulnerable is greater than with not giving it to them,” Nguyen said.

Sinha said that the issue of long-term care still needs attention during the pandemic, even though they are not the epicentre like in previous waves.

“I think the issues in long-term care have largely been forgotten,” he said. “I think people felt that ‘oh, we took care of that, it was dealt with.’”

McGeer says the problem isn’t that long-term care is being overlooked right now, but the idea that we may emerge out of the pandemic without fixing long-term problems in the long-term care system.

“I’m very concerned […] that it’s a marker of the fact that we’re just gonna forget about this problem when we’re through the pandemic, and that we’re not going to carry through on what we need to do to rethink long-term care in the country,” she said.