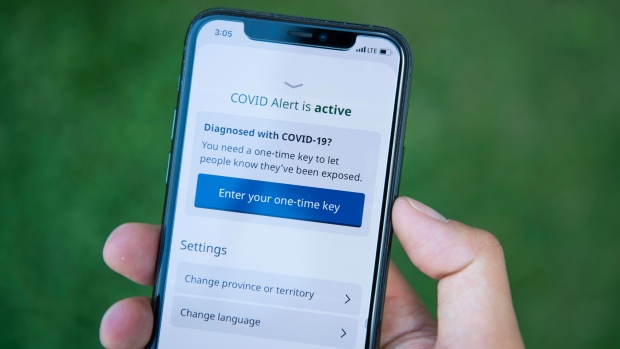 TORONTO — When the federal government launched its COVID Alert app in 2020, it was a way to help keep Canadians safe by alerting them to possible virus exposures before showing symptoms.

But, after nearly a year, has the app been making a difference in Canada’s fight against COVID-19?

Research from York University suggests that the app may be having little impact on slowing the spread of COVID-19 because of how few Canadians are actually using it in proportion to the country’s overall population.

According to researchers, the app has not been downloaded by the majority of the population.

Director of York University’s Digital Global Health and Humanitarianism Lab Researchers Jennie Phillips told CTV News Channel that accessibility and inclusion challenges − such as the lack of multilingual functionality − along with privacy concerns are deterring users from downloading the app.

“The elderly population is a perfect example in that they’re one of the sub-populations who are most vulnerable to COVID-19, but they’re also one of the populations that feels these apps are inaccessible to them,” Phillips said on Saturday.

Phillips said some people also have a fear of using these type of apps.

In order for the app to work, Phillips said Canadians need to use it. She noted that the more people who use the app will determine how much of an effect it is having on the pandemic.

There are currently nine provinces and territories that have made the app available to its residents.

However, only 25,552 people have voluntarily input their one-time key to notify others around them after testing positive for COVID-19, according to data from Health Canada.

When the app was launched, Prime Minister Justin Trudeau said that it would help Canadians keep their families and communities safe. He’s since repeatedly urged Canadians to download it.

“Young people need to download the COVID Alert app,” Trudeau said during a press conference in November. “It’s a way of helping your parents, your grandparents.”

Along with their findings, York University researchers have released 23 recommendations on ways the app could be improved after comparing it with tracing apps from other countries.

Canada’s COVID Alert app is currently only available only in English and French, creating a language barrier for many Canadians, including those who might be disproportionately affected by the virus.

Mandarin, Cantonese and Punjabi are among the most spoken languages in Canada, however, those languages are not offered on the app.

Researchers determined that without understanding the concerns of Canadians, finding ways to mitigate the privacy risks, and amplify the benefits of the COVID Alert app, user uptake will not be improved.

Phillips said Canada should consider incentivizing people to use these apps by building in additional functionality such as a “symptom checker” or create communication lines so Canadians remember that they have the app.

While Phillips still thinks the app has potential, she hopes some of their suggestions are taken to help make the app more accessible to the public.