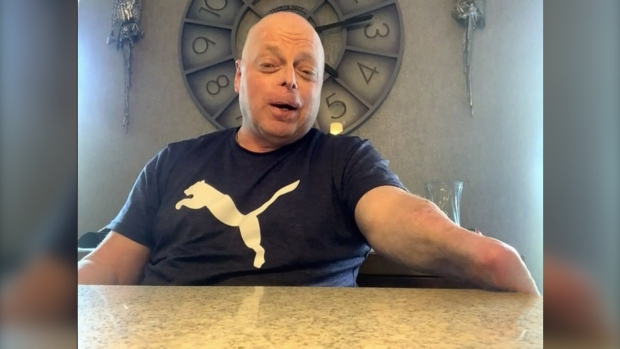 VANCOUVER — It was over a year ago when Rick Thompson and his wife left their life in Coquitlam, B.C., behind.

The couple moved to London, Ont., after they learned that Thompson had been approved for a double hand transplant. His operation would be the first time such a procedure was performed in Canada.

“We were told it was supposed to happen in August of (2020) … then it was postponed until November, December, then it was January, March, and now it’s May, or even longer, I just have no idea,” said Thompson.

The couple had moved to London in April 2020 to prepare for the surgery. The process involves medical and psychological tests, as well as waiting for a donor.

His doctors told him he would likely be added to the transplant list on  April 12, but with hundreds of COVID-19 patients now in Ontario’s Intensive Care Units, capacity is stretched – leading to desperate measures.

Ontario Health informed hospitals to ramp down elective surgeries on that same day – allowing them to expand the ICU.

While Thompson understands, the constant delay has been frustrating.

“It’s totally frustrating, and it’s all due to the fact that some people aren’t listening to the (COVID-19) medical advice they’ve been given.”

“It’s not just my surgery. It’s people who have been waiting years, for knee and hip replacements, back surgeries. They’re all delayed,” he said.

“I have a friend who has been waiting three years for a back surgery. She’s walking around in pain because she can’t get her surgery,” Thompson added.

The pandemic has delayed thousands of surgeries in Canada, but for Thompson, waiting for something most of us take for granted has been agonizing.

Thompson had all of his limbs amputated after he contracted bacterial meningitis in 2015 and went into septic shock.

He left work early one day, after what he thought was the flu, and thought he’d be able to sleep it off.

A few hours later, he woke up to get a drink of water.

“I tried to stand up and I couldn’t stand up, my feet were on fire. They were burning, they were so hot. I stumbled downstairs to where Rita was watching TV. The next thing I knew, I just remember collapsing and that was it,” Thompson said.

He woke up six weeks later in intensive care, confronted with the choice of dying in palliative care or amputation.

“If I wanted to survive, I would need all four limbs amputated,” he said.

After 8.5 hours of surgery, doctors had amputated his limbs.

But Thompson is not one to give up easily. He has since learned to walk again with prosthetic legs, while quietly campaigning for a double hand transplant.

“The goal is that this will be the first of hundreds. The more it becomes mainstream and recognized as a viable transplant, the government will start funding these procedures so people can get their independence back and get their confidence back,” Thompson said.