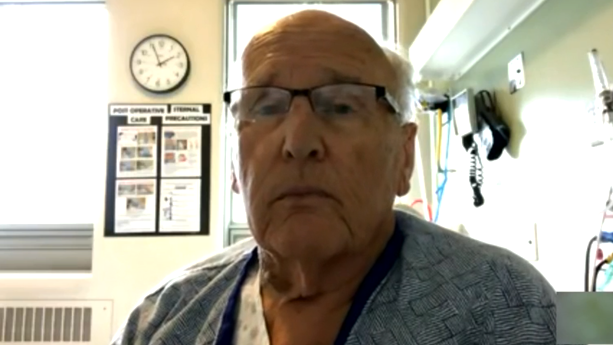 TORONTO — For two weeks in April, Terry McGinnis ignored his chest pain and shortness of breath out of fear that a trip to the hospital could lead him to contracting COVID-19.

It wasn’t until the 76-year-old retiree from Vancouver began experiencing chest pain even while resting that he decided it was time to visit a doctor.

“They suggested that I take a stress test, so I went down and took a stress test and I couldn’t pass the walking part,” he told CTV News from his hospital room. “They suggested if I have this happening when you’re resting. You should go to the emergency (room) immediately.”

On April 29, McGinnis was rushed to the Vancouver General Hospital for a risky emergency quadruple bypass that could have been avoided had his condition been treated sooner.

“If he waits another day or two, it’s unlikely he would have survived,” said Dr. David Wood, president of the Canadian Association of Interventional Cardiology. “He had a 99 per cent blockage in the big main artery supplying the heart. He likely would have died.”

It doesn’t appear McGinnis is alone in avoiding medical treatment for potential cardiac episodes. Cardiologists are reporting as much as a 40-per-cent reduction in patients with heart attacks showing up at emergency rooms, and worry people might be choosing to fight their symptoms at home instead of visiting a hospital.

“The problem is patients are afraid that they’re going to get COVID when they come to hospitals, so they’re staying at home and by the time they do present, they’re much sicker than they would have been,” Wood said. “We’ve seen this in other countries around the world and now we’re starting to see this in Canada.”

Cardiologists also don’t believe people are getting any healthier, either. In fact, some worry heart health might actually be getting worse due to added stress and inactivity during these times.

“During times of stress in the past, such as 9/11 or other very stressful situations like earthquakes, we normally would expect increasing numbers of people having an acute heart attack,” said Dr. Chi-Ming Chow, a cardiologist at St. Michael’s Hospital in Toronto.  “Now when you come into the emergency room — in the last few weeks — you notice it’s quite empty.”

Due to this concerning trend, cardiologists are now shifting their focus towards urging the public that they need to call 911 if they’re experiencing signs of a cardiac episode.

“During the pandemic of COVID-19, it’s really important to recognize that emergencies, are still emergencies, heart attacks do occur, strokes do occur,” Chow said. “If symptoms of heart attack or stroke occur, you have to call 911 or seek emergency medical health and don’t be afraid of getting help.”

Chow and a team at the Canadian Cardiovascular Society have launched the Emergencies are Emergencies campaign to get the message out to people in the community:

On Monday, Wood and several other cardiologists in North America published a set of guidelines for ramping cardiac surgeries back up to normal.

“We partnered with 15 heart societies around from the world – representing over 90,000 heart specialists — because we wanted to send a clear message that there is a way to safely reintroduce heart procedures so that we can treat patients on our waiting list,” Wood said.

Among the eight guidelines:

Meanwhile, McGinnis expects to be leaving the hospital in a few days and hopes telling his story eases some of the concerns people might have with going to a hospital during the pandemic.

“People are afraid to come to hospitals because they think it’s a place where the diseases is, but they’re very, very clean here,” he said. “They changed all kinds of procedures, you can tell just by the staff. It’s all new to them too. So they’re really closing the place down as far as people coming and going.”