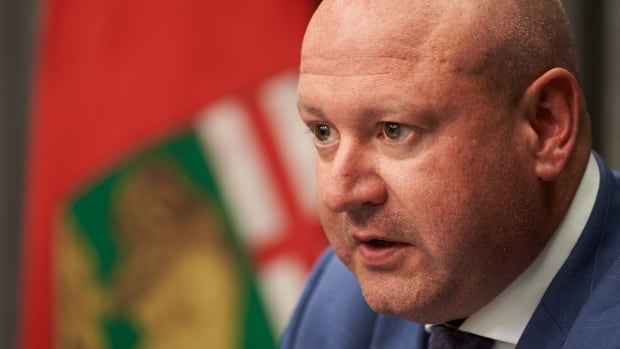 All Manitobans 50 and older are now eligible for a second COVID-19 booster shot, as well as anyone who is First Nations, Inuit or Métis and at least 30.

He also lowered the interval between booster doses to four months. Previously the wait was six months.

The province is also expanding the criteria for access to the oral antiviral Paxlovid, which is to be taken in the early days of infection by those with mild to moderate symptoms of COVID-19 who are at high risk of severe illness from the virus.

“We’ve had fairly tight criteria based on age and risk factors and vaccine status,” Roussin said.

The medication, which still requires a person to be within five days of symptoms starting, will be more widely available by prescription, at more than 175 pharmacies across the province.

Other respiratory viruses are also circulating in the province, including 18 confirmed cases of Influenza A as of last week, Roussin said.

“This is typically later on in what we would normally have as a flu season,” he said.

Dr. Brent Roussin is providing an update on Manitoba’s COVID-19 situation on Friday, one day after a weekly report showed an additional 66 deaths in the province and seven new outbreaks of the virus.

CBC Manitoba is live streaming the 11 a.m. news conference here and on Facebook and CBC Gem.

It is the first time Roussin has addressed the public about COVID-19 since April 7 and only the second time since regularly scheduled briefings ended in mid-March.

At the last regularly scheduled news conference, Roussin said the virus wasn’t gone and would likely stick around for a long time, but that Manitoba was moving into a new phase as the province removed the mask mandate a day earlier. Manitoba had lifted proof-of-vaccination requirements earlier in the month.

Roussin also announced at that time that demand for testing and vaccines had declined and the process of dismantling the province’s pandemic infrastructure would begin with the closing of a number of testing sites.

At his April 7 briefing, Roussin said COVID transmission was rising but the province would not be taking any new measures to combat it.

The province’s latest epidemiological report, released on Thursday, showed the total death toll from COVID-19 in Manitoba rose 66, from 1,847 a week earlier to 1,913.

There were also seven new outbreaks declared in the past week: three in hospitals and four in long-term care facilities.

Manitoba’s test positivity rate increased to 18.5 per cent, from 17.6 per cent the week before, while hospital admissions decreased, from 196 to 149. There were 16 admissions to intensive care units.