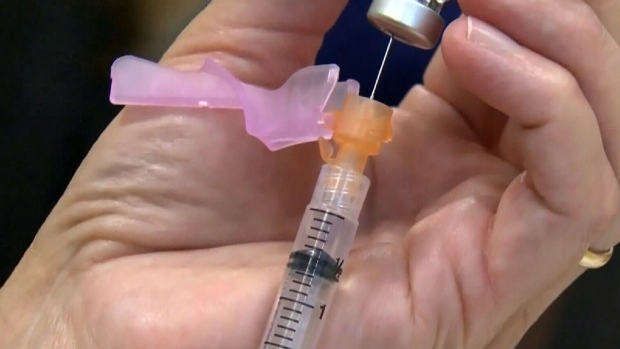 WINNIPEG — Manitoba health-care providers are being advised to stop using a certain influenza vaccine after three people from New Brunswick reported neurologic symptoms including numbness or weakness of the face or limbs.

The Flulaval Tetra (KX9F7) shot, manufactured by GlaxoSmithKline Inc. (GSK), learned of the effects on Nov. 13.

“Patient safety is a top priority for GSK,” the company said in a statement. “On Friday, November 13, we learned of the 3 reported serious adverse events in New Brunswick, Canada. We have launched our own internal investigations and are currently working with the Canadian health authorities to obtain more information as part of those investigations.”

The company said the outcome of the investigations will be communicated to the Canadian health authorities and the provinces once it is known.

GSK said they are aware of provinces suspending distribution and vaccination doses, and said people should contact their public health authority for immunization status.

Pharmacist Carey Lai explains when adverse effects are reported, an investigation is normal.

“That’s why as a precaution, they’ve asked everyone who still has this Flulaval Tetra vaccine specifically with this lot number to stop using it,” Lai said.

The province released a statement saying they did receive the vaccine, noting the lot was received and shipped between Oct. 22 and November 11. Approximately 64,000 doses were distributed from that order.

“Although no neurological or serious adverse events associated with this lot have been reported in Manitoba, out of an abundance of caution, providers are being asked to set aside doses from that lot and not use it until more information is available,” the province said. “Manitoba is working with federal and provincial partners through the national procurement process to determine how these doses may be replaced, if necessary.”

The statement adds there is low risk to the public, and no further action is needed from any Manitobans who have already received an influenza vaccine.

Lai said they have not been told to contact anyone who has been given this particular lot but the province has advised pharmacists to “cold chain” the lot, meaning they store the vaccine at a lower temperature to allow for possible future use.

Kathleen Scott, a Winnipeg resident, has been on the hunt for a flu shot and hasn’t been able to find any but the news of adverse effects won’t stop her from getting a flu shot when it becomes available.

“I am a breast cancer survivor and I have received one for several years. I really believe that the flu shot would be in my best interest,” said Scott.

The letter can be read below.