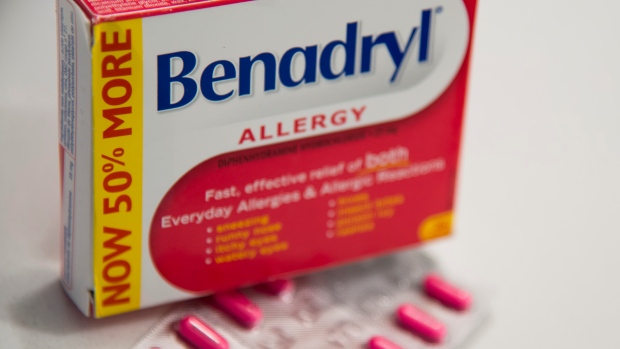 More than two years after allergy experts recommended newer antihistamines and warned against using Benadryl as a first-line treatment, many Canadians are still reaching for that recognizable brand name over others.

In October 2019, the Canadian Society of Allergy and Clinical Immunology (CSASI) put out a position statement regarding oral allergy medication, stating that newer antihistamines were safer than first-generation ones, and that they should be recommended over older staples like Benadryl due to a higher rate of potential side effects. The position statement referred specifically to medications that treat non-life-threatening allergic reactions such as hay fever and hives.

If it’s news to you that Benadryl is no longer recommended as a first-line treatment for common allergies, you’re not the only one. In 2022, it’s not only adult patients and parents who are still influenced by brand familiarity and haven’t made the switch — some doctors are as well, experts say.

“I think there are a fair number of pediatricians who still recommend Benadryl for allergies,” Daniel Flanders, owner and executive director of Kindercare Pediatrics in Toronto, Ontario, told CTVNews.ca in a phone interview.

“And if you speak to an allergist, they would simply say that that’s outdated advice.”

Benadryl is one of the most well-known brands for allergy medication, with numerous products available to buy without a prescription, including versions specifically made for children. Benadryl is approved by Health Canada, which has deemed it safe for over-the-counter use, concluding in a recent safety review of first-generation antihistamines that there hasn’t been any change in risk that would prompt it to change the drug to prescription-only.

Because of this difference, first-generation antihistamines like Benadryl are associated with more side effects such as increased drowsiness, issues with motor functions and working memory, as well as a risk of hallucination or even death in the event of an overdose.

But if many experts have believed for years that Benadryl shouldn’t be the first choice for oral allergy medication anymore, why are many Canadians and doctors unaware of this?

“Unfortunately far too often, physicians and other health-care practitioners, including pharmacists and paramedics, continue to commonly recommend Benadryl as a first line antihistamine for treatment of allergic symptoms, including symptoms from food allergy,” CSACI told CTVNews.ca in an email, adding that its 2019 messaging has “still not reached many health-care practitioners.”

Flanders said that while he’s not aware of any doctors in his clinic still recommending Benadryl, there are likely many across Canada still turning to the well-known allergy medication to treat mild allergies.

“I would say probably for 10 years it has been the case that we’ve known that it’s better to use the second and third generation antihistamines preferentially over Benadryl, but […] one of the funny things about medicine is that it does take a long time for information to trickle down from research through to practice,” he said.

“It is measured in years. It’s not uncommon, but it takes a good 10 years for the standard of care for the practice to adjust to some of the changes that science discovers.”

Flanders said if he had to make an estimate, anywhere from 25 to 50 per cent of pediatricians may still be recommending Benadryl as a first line treatment, though he cautioned that this is just his personal assessment.

“I’m hopeful that more than half of my colleagues are making that correct recommendation [instead of Benadryl],” he said.

A big reason that Benadryl is still recommended by health-care professionals is the familiarity of that brand name, which has been a giant in allergy medication for decades.

“Benadryl has so much recognition as an allergy remedy,” Flanders said. “The trade name is so well known, and so commonly used that I could imagine it would take a whole lot of work to sort of deprogram and reprogram parents’ minds. And also the minds of doctors who are not sort of keeping up with the cutting edge [of medicine].”

It was a sentiment that CSACI echoed.

“The familiarity of health-care practitioners, parents and adult patients with Benadryl and other first generation antihistamines makes it difficult to motivate changes in practice,” the organization said.

WHY DID CSACI DECIDE BENADRYL SHOULDN’T BE RECOMMENDED?

The active ingredient in Benadryl sold in Canada is diphenhydramine, and it’s one of the oldest first-generation antihistamines, having been available for sale since 1946.

In the position statement, CSASI explained that older antihistamines are associated with more severe side effects than second and third generation antihistamines which became available in Canada starting in the 1980s and had to pass high-quality trials.

“It is always preferred to use safer and more effective medications,” CSACI told CTVNews.ca in an email. “First generation antihistamines are significantly more likely to cause side effects, including sedation, poor sleep quality, and poor cognitive performance (including poor school and work performance). In addition, overdoses of first generation antihistamines can cause severe toxicity.”

Johnson & Johnson, the company that sells Benadryl in Canada, did not respond to a request for comment from CTVNews.ca.

In 2019, the company told the Canadian Press that “Benadryl products have been trusted by doctors and moms for more than 60 years to provide effective symptom relief from allergies and allergic reactions,” and that the products are approved by Health Canada and “when used as directed, are safe and effective.”

In 2020, a TikTok “challenge” spurred some teenagers to take enough Benadryl to induce hallucinations, which resulted in several teens being rushed to hospital.

The CSACI statement mentioned that in Canada, online surveys had shown that Benadryl was, at the time, the “most recommended antihistamine for allergic symptoms in children in each of the last 7 years.”

WHY IS BENADRYL STILL AVAILABLE OVER THE COUNTER?

It’s important to note that Benadryl isn’t considered dangerous — when instructions are followed, serious side effects are rare.

CSACI’s position was that there are new options that are just as effective and have fewer side effects overall, or milder side effects.

“I wouldn’t so much say that one should never use [Benadryl], it just doesn’t make sense to use it currently or in present day, because there are alternatives that are just as good and have a better side effect profile,” Flanders explained.

After CSACI released this position statement in 2019, there was a flurry of articles that questioned whether Benadryl should be available as over-the-counter medication. As a result, Health Canada announced that while products containing diphenhydramine met the requirements of the Food and Drugs Act, they would be assessing “to determine if further risk mitigation measures for diphenhydramine-containing products are required,” noting that the safety of children was a big concern of the Canadian public.

“There are no new safety concerns to warrant regulatory action at this time,” Health Canada stated in the monthly Health Product InfoWatch.

Flanders believes that one of the factors driving Benadryl’s enduring ubiquity in the minds of Canadians is because it’s available so easily.

“I think it would make sense to take Benadryl off the list of over-the-counter allergy medications, because just there are better options and there are side effects and those can have long term implications,” he said.

“And that might be a nice way to sort of educate or to leave the general public with no choice but to choose a more appropriate medication.”

In 2019, some pharmacists pointed out that putting Benadryl behind the counter doesn’t solve the safety issues, and could cause conflict if customers are still pushing for it.

Nardine Nakhla, a pharmacist who teaches at the University of Waterloo in Ontario, said at the time that there are many other products that contain diphenhydramine that are on the shelves, making it unrealistic to pull all of them, and that there are other products available over the counter that have safety concerns, making this a complicated problem.

IF I HAVE BENADRYL AT HOME, SHOULD I KEEP USING IT FOR MYSELF OR MY KIDS?

Flanders said that his advice depends on a family’s budget.

“If the purchase was made and there isn’t much money in the budget and there’s really bad allergy symptoms that need to be controlled, then Benadryl will do the trick, so I think it’s reasonable to complete the package,” he said. “And then next time you need it, buy the newer generation antihistamine.”

But if the cost of replacing the Benadryl immediately isn’t a concern, “then I would go right ahead and buy the new one and throw out the Benadryl, because there’s better options,” he said.

CSACI’s position statement pertained to all ages, but Flanders said that as a pediatrician, he is more concerned about making sure that children are receiving the best medication for whatever ails them.

“I think there’s an added dimension of risk for children because they’re still developing and they’re still in a very formative period of their lives. So if a child is chronically sleep deprived, I think there are more dire long term consequences,” he said, referring to side effects for Benadryl pertaining to poor sleep.

“For kids who are going to be taking it on a regular basis, it does interfere with the quality of their sleep and it can interfere with learning and with their sort of day to day functioning. It’s not like it’s the end of the world if you take Benadryl periodically for allergy relief, it’s just, there’s better options.”

WHICH NEWER ANTIHISTAMINES ARE PREFERRED?

CSACI gave CTVNews.ca a list of newer antihistamines currently available in Canada that it recommends over first-generation antihistamines:

“Many of these are available over-the-counter, some of which are also available as generic preparations, and others are only available by prescription,” CSACI stated.