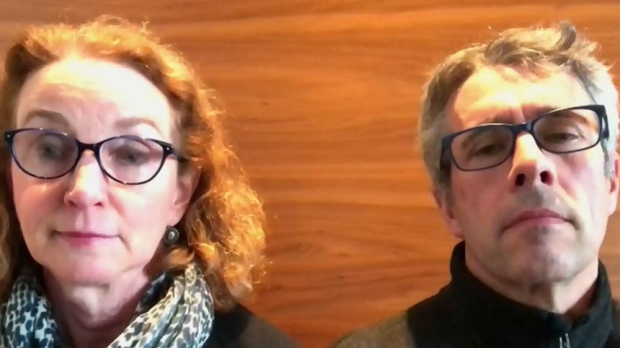 TORONTO — A married couple in Quebec who are both doctors and both tested positive for COVID-19 say their diagnoses show how little we really know about who is infected and long the virus stays with them.

Quigley’s wife, Dr. Janet Wilson, a family physician, started showing a mild fever and runny nose on March 20. Wilson said that she’s been lucky to have had only mild symptoms since the diagnosis.

“The thing I remarked was how anxious I was when I first found out I was positive, because I was reading all these reports of terrible cases and that’s not what’s happened to us,” she said.

While they wait out the infection, the couple is staying in isolation at their cottage in Lake Memphremagog, Que., along the Quebec-Vermont border, where Wilson has been helping her patients via telemedicine.

“I’ve talked to many people who sound like they probably have COVID, and they don’t meet the criteria to be tested,” she said. “I would like to tell everybody that everybody is potentially infected and we don’t know who is positive and who is not.”

As doctors, Quigley and Wilson are required to have two consecutive negative tests before they can return to work.

Given the virus has remained with Quigley for longer than the expected 14 days, he believes there’s still much to be learned about the virus and the best practices for slowing the spread.

“The issue is this is all in evolution,” he said. “We don’t have total knowledge about the virus yet.”

Quigley said that infectious disease experts that he’s been in contact with suggest the majority of patients are resolved within two weeks, but there are some outliers that still exhibit virus particles for up to five weeks after the initial testing.

As of Wednesday evening, there are more than 9,600 cases of COVID-19 in Canada and more than 4,600 in Quebec alone. To date, 111 Canadians have died from the virus.