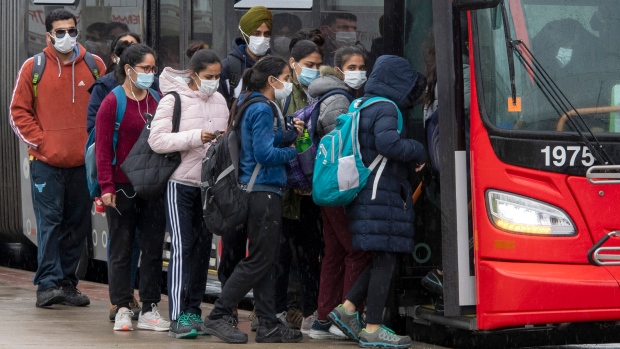 TORONTO — As a paramedic for a major service in Ontario, Stefanie Kranjec Correia knows firsthand the important role masks have played keeping her and her frontline colleagues safe throughout the COVID-19 pandemic. She is fully vaccinated now, but has no plans to retire her masks even in a post-pandemic world — and she is not alone.

From not wanting to get sick or make others sick, to enjoying unexpected benefits like keeping warm in the winter and finding refuge in anonymity, some people have come to appreciate the small piece of fabric for reasons other than preventing COVID-19 infections.

With vaccination rates going up and case numbers and hospitalizations coming down, the chatter has already begun on when things will return to “normal.” While there are no signs that public health guidelines in Canada will change anytime soon, discussions around mask-wearing have renewed after the U.S. Centers for Disease Control and Prevention’s announcement on May 13 that those who are fully vaccinated against COVID-19 would not have to wear one indoors.

Correia told CTVNews.ca she will keep wearing them on public transit and during cold and flu season, even if “some people might raise their eyebrows.”

“I don’t care, I’m going to wear a mask because I’m not going to bring that crap home … People can call me overprotective, or neurotic, or paranoid, or whatever.”

Correia would rather not see her three children — all under the age of six — suffer unnecessarily from colds, but she has extra reason to remain cautious: her husband, Nuno Correia, has an autoimmune disease that makes him especially vulnerable.

“Now he’s walking around in the middle of a pandemic with no immune system. So that’s why he got his second dose so fast,” she said.

But because of the medication he takes, they have no idea how effective the vaccine will ultimately be for him. Their children know they have to be extra safe for their dad and have been really good about wearing their masks, Correia said.

“So that’s another reason why it makes sense for us to mask up when we’re in situations where we’re in large crowds, or we’re out and about during flu season.”

The conversation around masks has evolved dramatically during the pandemic. The hesitancy in the early days stemmed from a combination of public health messaging, concerns about a supply shortage for health-care workers, doubts over the airborne nature of the SARS-CoV-2 virus, and skepticism around the effectiveness of masks. For some, masks have been — and remain — a political flashpoint as well.

But videos that visualized how masks prevent germs from spreading and numerous studies published over the last year have persuasively demonstrated their protective function alongside physical distancing and hand-washing, particularly if the wearer is sick.

Mask-wearing in public was recommended by the Public Health Agency of Canada (PHAC) in May 2020. By September, 97 per cent of Canadians over the age of 12 were publicly wearing a mask, Statistics Canada found.

In Canada and around the world, the public health measures also helped drive influenza numbers to unimaginably low levels. There were so few cases and no evidence of any community transmission across Canada that PHAC never declared a flu season. According to government data, there were a total of 55,379 influenza cases during the 2019 to 2020 season, which was also cut short by the pandemic. In contrast, only 72 cases of the flu had been confirmed this season as of May 22, 2021.

“I would probably still wear a mask on public transit, especially if I had a cold. It’s very packed most of the time,” said Chloe Hong. She lives in the Greater Toronto Area and commuted to work by public transit prior to the pandemic.

It is a sentiment echoed by Julie Gordon, who lives in Ottawa. She and Hong were among a dozen people who told CTVNews.ca they plan to continue wearing masks as needed even when it becomes no longer necessary.

“Oh man, I hope that becomes the norm for cold and flu,” Gordon said. Still, she added, “I’m wondering about the societal pressure to ‘go back to normal’ though.”

Many would like to see mask-wearing normalized, which could also help those who can not afford to take unpaid sick days and/or who have no choice but to take public transit for work, for example.

Others say the motivation to keep wearing masks extends beyond catching viruses too.

This past winter, many social media users were delighted to finally have a solution that kept their noses warm.

“Can we keep masks when COVID ends? They keep my face warm in winter AND let me hide my God-awful jawline. No downsides,” one user tweeted in January.

And Joyce Alene wrote on Twitter in April, “While so many people are tired of wearing masks, personally, I’m ecstatic to have found something that works for [seasonal] allergies.”

Some women found that wearing a mask meant they didn’t have to worry about their appearance. It also kept men from harassing them or being told to “smile”, the Washington Post and New York Times have both reported.

“Wearing a mask is so liberating I might hang on to it, even if they do find a COVID-19 cure,” Clare Mackintosh told the Times last year. “Not a single person has suggested I’d look prettier with a grin on my face.”

Susan Orlean, a staff writer for The New Yorker, wrote in a Medium post about the “unexpected pleasures” of mask-wearing and how she has “grown to like the neutrality of wearing a mask. I like the privacy it affords me, and the fact that my expression is mine and mine alone.”

It’s a sentiment shared by others: “I enjoy wearing my mask now, it gives me some privacy lol. I think it will be a permanent part of my lifestyle,” one Twitter user wrote earlier this month.

A blog about urban China once compared wearing masks to wearing headphones or sunglasses — serving as a “social firewall” or a “do not disturb” sign when in public.

In many parts of Asia where mask-wearing was normalized prior to the pandemic, it was also not uncommon to see people wearing them when they were under the weather or when the air quality index — which measures how polluted the air is — was particularly high, for example. And celebrities wore them to maintain their anonymity while out in public.

To be sure, while there are a number of valid reasons why some people will be glad to see the end of masks – from medical exemptions to past trauma — wearing them has been contentious since the beginning. And in the U.S., there are numerous reports of a backlash against those who continue to wear them despite the CDC’s new guidance.

Correia is sympathetic and could see some people who were not anti-maskers during the pandemic behave and react poorly toward mask-wearers like herself in a post-pandemic environment.

“Seeing someone with a mask is going to be like a slap in the face to them,that things are not the way they were, and it’s going to make them uncomfortable and when people get uncomfortable, they react badly … just because they don’t want to be reminded of the hell that we’ve been through,” Correia said.

The mental health toll experts warned about throughout the pandemic is unlikely to disappear overnight. Despite some people’s wish to ease away from masks, there remains a lot of nervousness around returning to normal after living in a pandemic. A Leger survey in May found that 52 per cent of respondents felt some degree of anxiety over the idea of going back to how things were before COVID-19.

Even with all the practical reasons why Correia plans to keep masking-up, the pandemic has permanently altered her perspective.

“Just being on the front line, and seeing the absolute devastation of what this did to every generation, families, and to businesses, and to the economy, and to our faith in public institutions, and just the way we live our lives — I’m not going to forget that.”