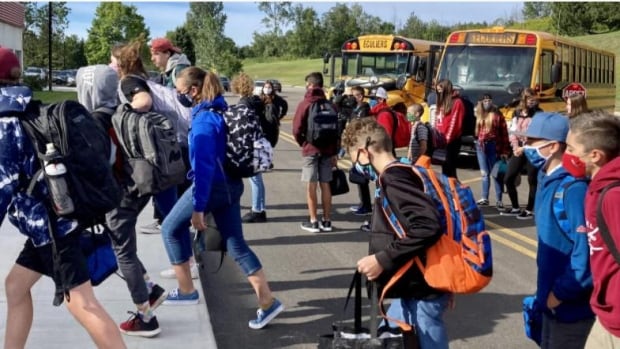 High school students in Quebec’s red zones will be required to wear masks in the classroom, organized sports will be prohibited and gyms closed under new restrictions aimed at containing the spread of the coronavirus.

The new rules, announced today, go into effect Oct. 8 until at least Oct. 28.

Education Minister Jean-François Roberge said students in Grade 10 and 11 will pivot to a hybrid form of schooling Thursday, where they will be physically in school only one out of every two days to reduce class sizes.

Roberge said all intramural sports, competitions between schools and school outings would be prohibited in red zones. Gym classes and in-school sports will be allowed on the condition that all students remain within the same groups as they do for their classes.

All in-person courses in CEGEPs and universities are also suspended in red zones as part of the new restrictions.

Many high learning institutions had already decided to move their semesters online, but certain activities, such as labs, had been permitted. With the new regulations, all activities will be suspended.

On Monday, the province recorded 1,191 new cases — the fourth day in a row that Quebec’s total exceeded 1,000.

The greater Montreal area, as well as the Quebec City and the Chaudière-Appalaches regions, were designated as red zones under the province’s COVID-19 alert system last week. As of midnight Monday, three towns in the Gaspé region will join them.