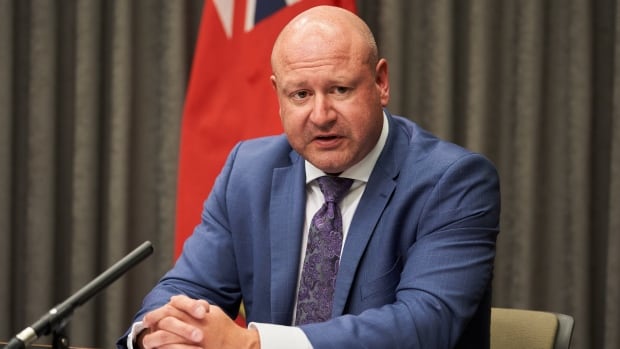 People in and around Winnipeg will have to wear masks in indoor public places and restrict gatherings to 10 people starting Monday, as the region moves to restricted orange under the pandemic response system.

More than half the people in those communities come into Winnipeg for work every day, Roussin said, which is why they’re included in the list of places that need to follow the new rules.

The new rules will stay for at least four weeks, or two incubation periods of the illness, Chief Provincial Public Health Officer Dr. Brent Roussin said at a surprise news conference Friday afternoon, and more restrictions may be brought in at any time.

Rules for schools, child care, retail stores, museums, theatres and casinos in those regions will stay the same for now.

Masks will be mandatory for people who work with the public, but otherwise the new rules will not apply to workplaces, Roussin said.

People going to restaurants in the affected communities will also have to wear masks, though they will be allowed to remove them once they sit down to eat, he said.

Officials also plan to talk to people in the restaurant industry — plus bars, beverage rooms, brew pubs, microbreweries and distilleries — about what steps they can take to lower the risk of spreading the illness.

More measures may be brought in after those consultations, Roussin said.

There are 54 new cases of COVID-19 in Manitoba on Friday, Roussin said, including 44 in the Winnipeg health region.

There are four new cases in the Southern Health region and two each in the Prairie Mountain, Interlake-Eastern and Northern health regions.

Manitoba’s COVID-19 test positivity rate — a rolling, five-day average of the tests that come back positive — is now up to 2.6 per cent. In Winnipeg, that number is roughly 3.1 per cent, Roussin said.

There are now 487 active cases in Manitoba, including 401 — more than 82 per cent — in Winnipeg, according to provincial data.

Twenty-eight cases of the illness have now been linked to the outbreak at John Pritchard School in Winnipeg, Roussin said. Five of those are people who are not directly linked to the school.

There are now 13 people hospitalized with COVID-19, including six people in intensive care; 19 people have died and 1,258 have recovered.

To date, there have been 1,764 COVID-19 cases detected in Manitoba.

Roussin said on Thursday that roughly half of Winnipeg’s recent cases of the illness were in young people who were out at bars, pubs and restaurants during the time they contracted it.

The surge in COVID-19 cases in Winnipeg has led to a spike in demand for testing in the city, causing long lineups and hours-long waits at test sites.

Roussin said Thursday that the province is looking into possible new ways of testing to alleviate some of this pressure, but cautioned it’s too early to say whether Manitoba will follow Ontario’s lead by offering the test in pharmacies.

On Thursday, 2,354 more COVID-19 tests were done in Winnipeg, the province said. Meanwhile, the number actually done on Wednesday was updated to 1,607 on Friday.

Those tests brought the total done in Manitoba since early February to 173,999.