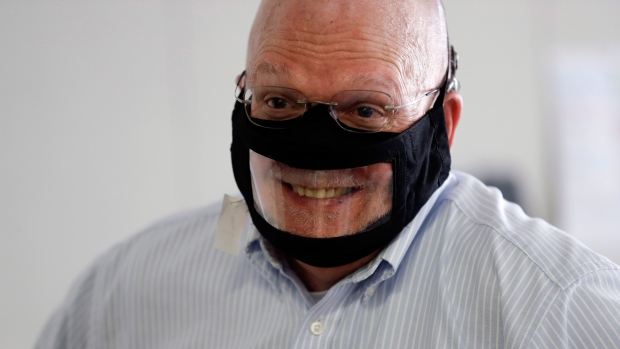 TORONTO — Wearing a mask has become part of everyday life, but for those who are deaf, not being able to read other peoples’ lips has made the pandemic feel even more isolating.

To solve the problem, some mask-makers have started selling masks with transparent windows in hopes of allowing anyone with hearing impairments to carry on a conversation.

San Diego costume designer Ingrid Helton is among those who decided it was important to look into a solution. She created a mask with a clear plastic window, and she says she’s been inundated with demand from across the U.S., where an estimated 48 million Americans are deaf or hard of hearing. In Canada, more than 3.2 million people are considered hard of hearing and 357,000 are deaf.

“I want to show that you can see smiles. You can see expressions,” Helton said.

The problem extends beyond simply being able to communicate in public spaces. Hearing-impaired people who’ve had to go to the hospital during COVID-19 have faced an extra level of difficulty communicating with doctors and nurses.

Melissa Parker is hearing impaired, and she recently had to visit hospital for surgery. She said she was relieved when she saw hospital staff using transparent masks.

“I really was almost moved to tears,” she said.

A couple in Barrie, Ont., have created their own cotton face masks with clear vinyl windows over the mouth. Massimo Cucchiella and his wife, Sarah, decided to start creating the personal protective equipment when Cucchiella’s construction company was put on hold during the pandemic.

“I’m happy we were able to do something for this part of the community,” Cucchiella said.

The demand for transparent face makes isn’t limited to the deaf community. An Italian fashion company that began selling its own models for the hearing impaired said it has seen a surge in demand from all sorts of businesses, including hair salons and dentists.

Face masks present other health concerns for some groups, including individuals with asthma who may have trouble breathing with a face mask.

“Be very aware of those with different types of cognitive, intellectual disabilities, those who are hearing impaired and others,” Tam said.

“Don’t assume that someone who isn’t wearing a mask or is wearing something different doesn’t have an actual reason for it.”

With files from The Associated Press, The Canadian Press and CTV News Barrie