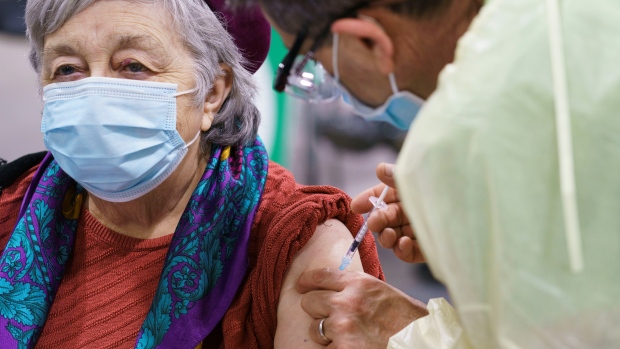 MONTREAL — Canada’s first homegrown vaccine for COVID-19 is showing promising antibody results in hundreds of participants in a Phase 2 trial and could be ready for a final authorization request this summer.

Nathalie Landry, the executive vice-president for scientific and medical affairs for Medicago, said the vaccine appears to produce 10 times the antibodies as are seen in people who have had COVID-19.

“So based on these results, let’s say we’re quietly confident that we will be in a position to demonstrate good efficacy of the vaccine.”

The results are not yet peer-reviewed but Landry said other vaccines in use showed a direct correlation between the level of antibodies produced and their effectiveness against COVID-19.

A Phase 3 trial for Medicago with 30,000 volunteers is already underway in Canada, the United States and the United Kingdom, and will expand to Brazil this week.

The Phase 3 trial is the final step before Health Canada can decide whether to approve the vaccine or not, something Landry hopes can happen this summer.

If approved, the Medicago vaccine is likely to be the first COVID-19 shot produced in Canada in any way. The bulk material will mainly be manufactured at Medicago’s North Carolina facility, but the vials are filled and finished with the GlaxoSmithKline pandemic adjuvant in Canada.

An adjuvant is a substance used in vaccines to help aid in the immune response.

A new manufacturing plant in Quebec that could make most of the bulk material in Canada is still under construction. Landry said the initial in-service date of 2024 has been tentatively moved up a year to 2023.

Canada signed a deal in October to buy 20 million doses of Medicago’s vaccine, with an option for 56 million more. But most Canadians will be vaccinated before Medicago is approved, leaving its role in Canada unclear.

“We have been discussing that situation with the Canadian government,” said Landry.

She said the most likely scenario is for booster shots. Canada could also donate the 20 million doses it purchased to the global COVAX vaccine-sharing alliance.

Landry said there are some discussions about testing Medicago as a mix-and-match vaccine for second doses but acknowledged there may not be time to complete that now.

Most Canadians should be fully vaccinated by the end of the summer.

Canada has authorized four vaccines to date and 45 per cent of the population has received at least one dose. To date, about two-thirds have been given Pfizer-BioNTech, one-fifth have received Moderna and the rest Oxford-AstraZeneca. Johnson & Johnson was approved in March but hasn’t been used in Canada yet.

Medicago’s Phase 2 trial tested the virus-like particle vaccine on about 900 volunteers in Canada and the United States.

One-third of the group were healthy adults between 18 and 64, one-third were over the age of 65, and the remaining third were adults with existing health conditions that might make them at higher risk if they get infected with COVID-19.

Only results for healthy adults and seniors are reported now, with results for those with existing health conditions still to come.

Overall side effects at the time of vaccination were reported as mild and very short-lived.

Seniors didn’t see as robust an immune response to one dose as adults between 18 and 64, but both groups showed similar levels of antibodies after a second dose.

The Medicago shot is a virus-like particle vaccine, which grows a virus that resembles the SARS-COV-2 virus but doesn’t contain its genetic material and therefore can’t multiply or make you sick.

Usually virus-like particle vaccines, like those used against the human papillomavirus or HPV, are grown in yeast or bacteria. Medicago’s technology grows the particles in a plant that is a relative of the common tobacco plant.