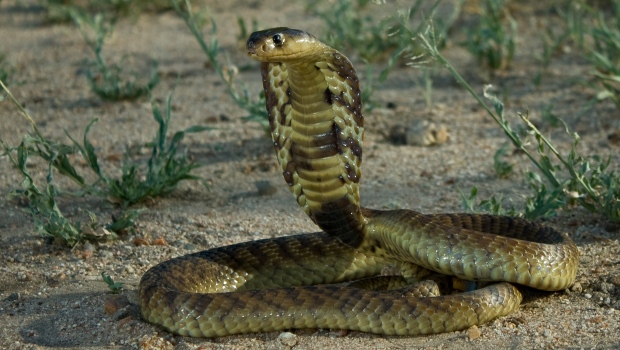 TORONTO — A recently published medical case report has described in detail the outcome of a man who was bitten in his genitals by a snake.

According to the case report published in Urology Case Reports, the 47-year-old Dutch man had been on vacation in South Africa. He was otherwise healthy and was using a toilet when he was attacked by a snouted cobra that was hiding in the toilet bowl.

“During this time, he felt a burning sensation in his genitals and a pain that ascended through his groin to his flank, upper chest and abdomen. He also reported vomiting but no neurological symptoms,” the authors wrote.

The authors say their case report is the first to describe a bite from a snouted cobra, a highly venomous species of cobra commonly found in southern Africa, to the genitals.

After the snake bite, the man waited three hours for a helicopter to take him to the nearest trauma centre, located 350 kilometres away.

“His penis and scrotum were noted to be swollen, deep purple in colour, and painful on hospital admission,” the report states.

The authors say this indicates scrotal necrosis, which is the death of body tissue in the scrotum area. Doctors administered eight doses of snake venom antiserum as well as tetanus prophylaxis as he was taken into intensive care. He also received medication for his fever as well as acute kidney injury.

After one week, a urologist performed surgical debridement on his scrotum, which involves removing the damaged skin. The injury to his penis was treated with debridement and a vacuum-assisted closure pump

Nine days after the snake bite, the man was taken to a hospital in the Netherlands. Dutch urologists saw that the wound on the scrotum looked stable and cleaned up the wound on the penis with a vacuum pump. The man also received red blood cell and potassium supplements.

Six days after returning to the Netherlands, a plastic surgeon reconstructed the penile shaft and placed a skin graft over the penis. After two weeks, he was discharged. When doctors followed up after a year, they reported that the man’s wounds had healed and “penile function and sensation had fully recovered.”

“Our take home message? Always flush the toilet before sitting down in countries notorious for their snake population!” the authors wrote.