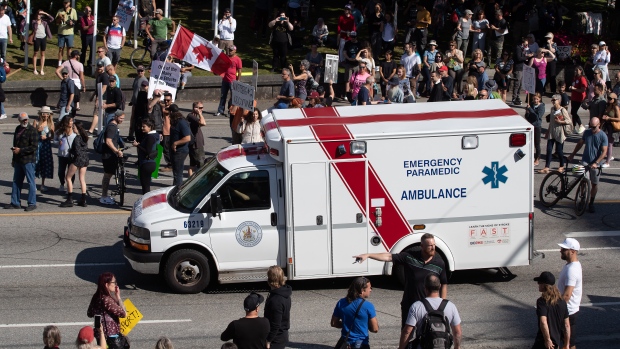 TORONTO — Several days of protests at hospitals around the country drew rebukes from medical industry groups on Friday, who raised concerns about the actions of protesters interfering with people seeking to access care.

Protests snarled traffic near hospitals in several cities this week, as demonstrators showed their displeasure with so-called ‘vaccine passports’ announced or enacted in Ontario, Quebec, Manitoba, and British Columbia.

“Unfortunately, anti-vaccine messaging has escalated in recent weeks; and, in certain cities and communities, we are seeing mounting protest which is precluding access to much needed health care settings and demoralizing health care workers,” CMA President Katharine Smart and OMA president Adam Kassam said in the statement.

In Vancouver, a crowd estimated by police to be around 5,000 people took to the streets, chanting “freedom, freedom” on a march from Vancouver General Hospital to the city hall. Hundreds also gathered at protests in Saskatchewan and Manitoba.

While polls show the idea of vaccine passports is popular with the population in general, those opposed have quickly gotten the attention of those in the medical community.

Anthony Dale, president and CEO of the Ontario Hospital Association, called the protests “truly disheartening,” particularly as they have comes in the midst of a COVID-19 fourth wave that has seen infections rates surge across the country.

“(The demonstrations) impeded patient access to the hospitals themselves. By denying the effectiveness of COVID-19 vaccines, they also inflicted moral injury on health-care workers who are working tirelessly on the front lines, caring for patients sick and dying from this dangerous virus,” he said.

New cases have been climbing steadily since late July across Canada. On Friday, Quebec reported 750 new cases, its highest total since May, while Ontario topped 800 cases for the second straight day.

Gillian Howard, vice-president of public affairs and communications at Toronto’s University Health Network, which operates two hospitals on University Avenue, said traffic disruption from the protests was minimized by police.

“Those who have been working long and hard to care for people who are very sick with this virus hope that everyone will be vaccinated to ensure that our health system is not overwhelmed in this fourth wave,” she told CTVNews.ca in an email.