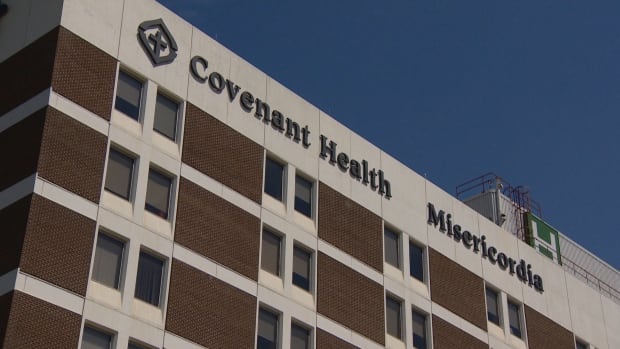 The Misericordia Community Hospital has closed its doors to new patients and cancelled all surgeries as an outbreak of COVID-19 continues to spread.

The west Edmonton hospital is now under a “full facility outbreak” due to ongoing transmission of the virus, Alberta Health Services and Covenant Health said in a joint statement Wednesday.

David Zygun, Edmonton Zone medical director for AHS, said the measure was needed to restrict the spread of COVID-19, maintain adequate staffing levels, and maintain the safety of patients and staff in the hospital.

“I know the public will think that this is difficult news, and I want to ensure everybody that we’re taking this aggressive step to stop the transmission,” Zygun said.

As of Wednesday, 20 patients and 15 staff members had tested positive.

Three patients linked to the outbreak have died. A spokesperson for AHS said the patients who died were two men in their 70s and a man in his 80s.

Cases have steadily increased since the outbreak began on June 20.

The hospital had previously cancelled day surgeries, restricted visitors and had begun testing of staff and patients.

With the number of infections increasing, the hospital is adopting more aggressive protocols in a bid to control the spread. The Misericordia has now temporarily closed all adult and child services to incoming patients, including the emergency department.

Arrangements will be made for women in labour to deliver their babies at the Grey Nuns Community Hospital.

Zygun said AHS and Covenant Health are working to examine every aspect of the outbreak, and conducting extensive contact tracing and analysis.

He said hospital staff are being reminded to stay vigilant with appropriate PPE, hand hygiene and masking.

Michael Parker, president of the Health Sciences Association of Alberta, a labour union that represents more than 26,000 health workers in Alberta, said the strain from the outbreak will be felt by the whole system. More than 450 Misericordia staff are represented by the HSAA, and Parker said this is a stressful time for them.

“This is what we’ve been kind of waiting for and here it is. It’s a full-on outbreak inside a hospital,” Parker said. “They are trained professionals, they are managing, but it’s taking its toll.”

But Parker said the Misericordia’s response is exactly right to combat the spread of COVID-19 in the hospital.

“This is what a containment looks like,” Parker said.

“We haven’t seen a lot of it in Alberta, because we haven’t achieved this level of outbreak, but it’s happening now. And what they’re doing there is responding appropriately to it.”

John Conly, a University of Calgary professor specializing in infectious diseases, said an outbreak like this can happen from patients coming into the hospital with atypical symptoms or with symptoms that aren’t recognized early enough. Staff might mistakenly view such patients as low-risk, leading to COVID-19 transmission.

Conly also said other Edmonton hospitals should be better equipped than usual to take the overflow of patients, because many aren’t operating at full capacity because of the pandemic.

“The ability to be able to pick up the capacity at other sites would be better than if they were running at a full head of steam,” he said.

This isn’t the first outbreak of COVID-19 in a Canadian hospital; the Toronto Western Hospital declared several outbreaks earlier this year. Conly said it’s unlikely these will be the last hospital outbreaks in Canada, and that robust hospital-wide response is required to handle them.

“It’s a matter of just identifying where the cases are occurring, where the transmission events might have occurred based on the investigation, and then applying the necessary control measures,” Conly said.