MONTREAL — On June 16, the first in a series of portraits appeared on photographer Karene Isabelle’s Instagram page.

Nurse Barbara Petit-Frere shines framed in flowers to launch the “Black Women in Health Care” series of pics by the local photographer.

When the COVID-19 pandemic hit, Isabelle admitted she was extremely concerned about catching the disease.

“I was in lockdown at home, washing the produce, cleaning my hands obsessively, and my husband was still going to work. He was like, ‘You need to get out there. Wear your mask, be careful, but the germ is not outside waiting for you to contaminate you,'” said Isabelle, who is of Haitian heritage and knew there were many women in her community who could not stay home but were rather on the front lines working to keep people safe during the pandemic.

“I would listen to these stories and tell myself, you’re basically buried at home, and these other women are, yes, scared, but still going to do their work treating patients,” she said. “It got me thinking: ‘Are we telling the story of these people who are, in a way, sacrificing themselves?’ There’s a human aspect of it that I really wanted to outline.”

Petit-Frere is one of the many health-care professionals who caught COVID-19 doing her job on the front lines. 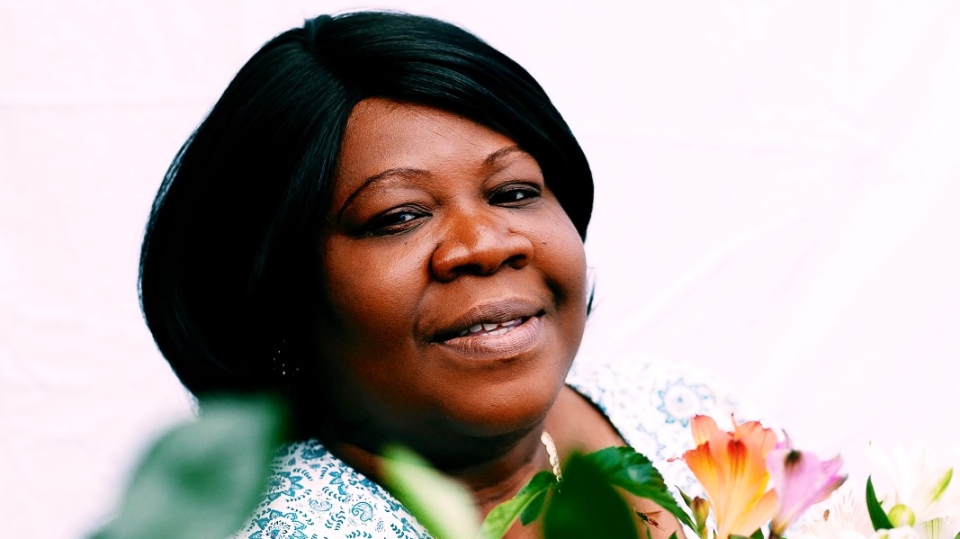 Her portrait is followed by pictures of a dental hygenist, nursing manager, anesthesiologist, two social workers and three nurses.

Eding Mvilongo is an anesthesiologist and is part of the team in the province’s surgery rooms working overtime to respond to the massive backlog in surgeries due to the pandemic.

She admitted to being a “behind the scenes kind of person,” but found the photography project important and wanted to be a part of it to send a message.

“First of all, we exist. Second of all, we matter, and third, that we need to stick together to make sure everybody gets better,” said Mvilongo. “It’s kind of nice to feel recognized that you actually do exist, and there are professionals among us. There are not only negative things about Black people, and there are Black women that are also professionals. It’s not always the stereotypes in the media.” 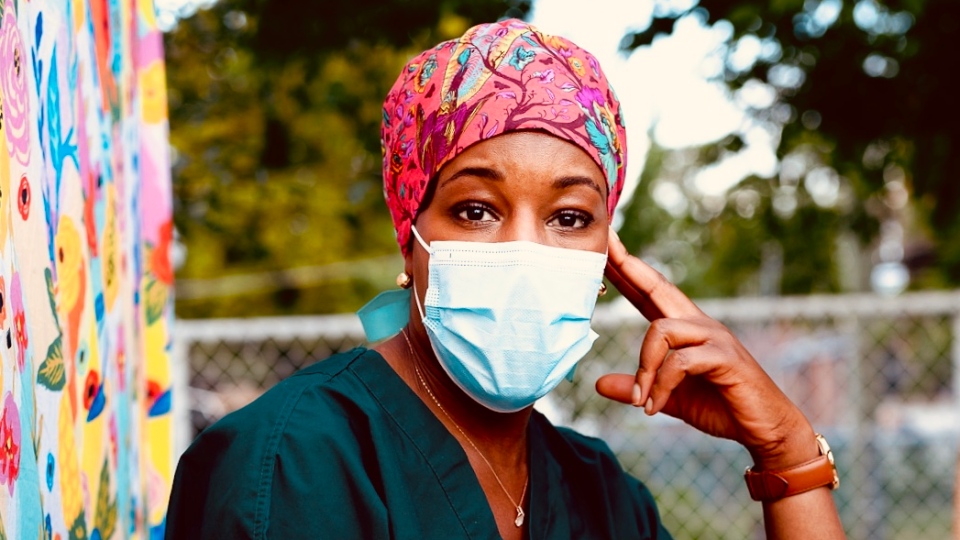 Each subject is photographed in their work uniform and “an outfit they feel fabulous in.”

“I want to, yes, show that they’re doing their work, but there’s a human side to it, there’s a vulnerability as well,” said Isabelle.

“For the most part, they want to show me who they are,” said Isabelle. “When they wear their uniforms, there’s a lot of emotion that comes with that, so they show me that side, and when I ask them to go change and change their makeup, it’s something else. This is who they really are, and it’s their fun selves and how they interact with people they know.”

THE REALITY ON THE GROUND

In hearing the stories of overworked, underpaid, and exhausted health-care workers, Isabelle got a real sense of what their day-to-day work is like.

“They were nervous. Most of them said they felt like they were plunged into a situation that was very chaotic,” she said.

Johanne Casseus is a dental hygienist who worked with children in schools before health and social services called on her to work at COVID-19 screening clinics in the hard-hit Montreal North neighbourhood.

She went from seeing children to deceased COVID-19 patients within two weeks.

“Obviously, this was very hard because this was a very stressful moment,” she said. “Initially, it was mainly a fear of getting it (the disease) because one of my colleagues got it the same day we started working together. I was really stressed about it, but afterwards, you just get your act together and have to do the best with it.” 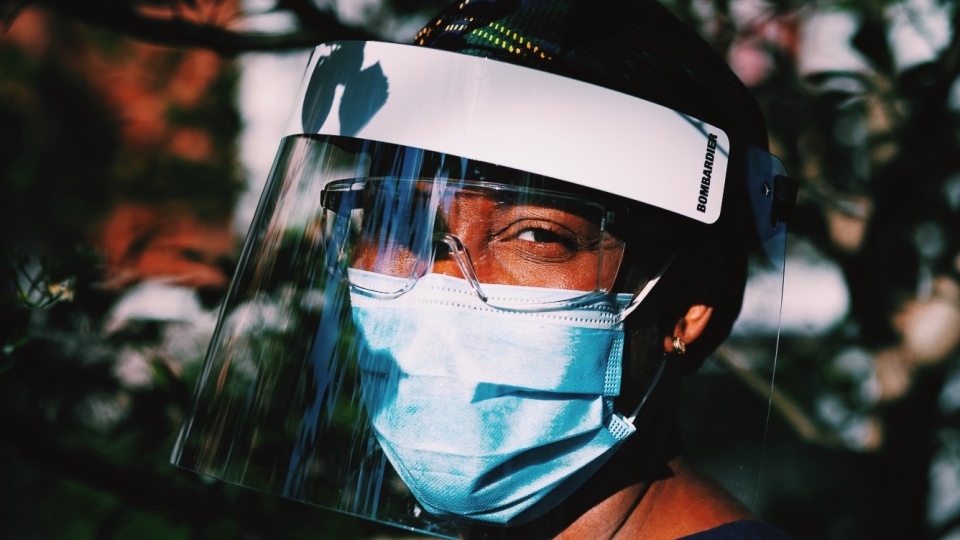 Health-care professionals have also had to adjust their living situations to ensure safety.

Casseus sent her daughter to be with the girl’s father for three weeks to ensure that, if she did contract the disease, she wouldn’t spread it.

“I didn’t want to contaminate her,” she said. “Being far from our family to that work, it was very hard.”

Marjolaine Merisier has been a nurse for four years and volunteered to work in the intensive care ward when the pandemic hit.

Like Casseus, she took the pandemic as an opportunity to expand her skillset.

“As somebody that works in the medical field, you have a lot of knowledge, not only in that particular field you work in but also in other things,” she said. “It gives people an opportunity to reinvent themselves because we did a lot of things that we never thought we would do.”

Merisier admitted that the work as high-paced and stressful, but the team-first attitude on the ground was inspiring.

“The stress was always there, and even for people that are more used to it than us in the unit, but we were helping each other out a lot,” said Merisier. “People were more prone to working together than working individually.”

For Isabelle, hearing how hard her subjects worked, and the stories of minimal pay increases combined with the stress and importance of the job was frustrating to hear.

“On the one hand saying: ‘we value you. We think that you’re wonderful, but I’m not actually going to pay you more,'” said Isabelle.

Lourdenie Jean works for Environment Intersectionnel and decided to do something for Black health-care workers on the front line. She organized a free three-day retreat on the weekend to give workers a chance to breathe and be taken care of in nature at a chalet.

“I have a lot of health-care workers in my family, and I could see that they needed rest from the pandemic,” she said. “It really touched me a lot.”

Mvilongo said vacations and rest are nice, but for her, she would rather do what’s right for the community.

“You have to make sure things don’t get worse,” she said. “The frustrating thing is when you see people not even caring about all the efforts that are put forward to help out with this pandemic, it’s a little bit maddening that I would have to stay home and isolate all the time to make sure I don’t get sick, to make sure I’m able to work and help out, whereas other people just don’t care, don’t believe in masks. That’s the part that’s frustrating.”

All the women know who they are working for, and it is this base that inspires them to put others first.

“When you do something, it makes sense to you that you’re doing it for your community,” said Casseus. “You find courage, and you go up front and do it.”

The portrait series gave Isabelle a chance to show just a few of the many Black women working in health care.

“When you look at the health-care system here in Montreal, the Black community is very well established in the medical care system,” said Merisier. “We are everywhere as nurses, as respiratory technicians or even social workers. We are everywhere, and being a part of this project, it shows a different side of COVID-19.”

Casseus often finds herself as the only person of colour on her team, and she strives to always lead by example.

“I always felt that when I was somewhere, I was a minority among other people,” she said. “I always felt I had to do well and probably better than the average. Sometimes I am the closest people from other nationalities have come to a Black person. Therefore, I was them to know the best of what a Black person could be.”

Casseus says though the front lines in health care are replete with capable people of colour, at the higher levels, her community is absent.

“We’re a lot on the front lines, but when it comes to managing, directing in my organization, I don’t see myself,” she said.

Mvilongo said some people still feel a doctor must be a white male, and ask her when “he” will arrive when she introduces herself.

In Montreal North, Isabelle knows that a lot of her community became infected because they were on the front lines, and that many Black women take jobs in the health sector.

“As a Black woman, you always look to find something that will give you that security, and you won’t have that feeling of needing to be in the hands of somebody who does not feel that you add value because you’re a Black woman,” said Isabelle.

The Black Lives Matter movement gave those in the community a chance to shine a spotlight on their underappreciated value, according to Isabelle.

“You’re looking to take care of others as a Black woman. You do that often, and you forget yourself,” she said. “The Black Lives Matter (movement) was like, hey, you exist, and you can be not okay with certain things, and you can denounce some things as well.”

Isabelle and those she photographed told her the movement has particular resonance in Quebec where the English-French dichotomy sometimes masks the mainstream’s ability to notice the multi-ethnic reality in the province.

“Quebec is not a monolith, people look different, and that’s okay that they’re integrated and they’re here and they’re part of society, and they help, so we need to be able to see them exist in a space,” said Isabelle. “I know that the typical Quebec hospital is filled with Filipino people, with Black people, with Hispanic people. Why am I looking at this footage and I’m not seeing these people?”

For the subjects of Isabelle’s lens, the response was emotional to seeing the project take form.

“We’re a part of history, and it’s documented,” said Merisier. “You’re proud to see that people are part of this situation and how they contributed in a good way.” 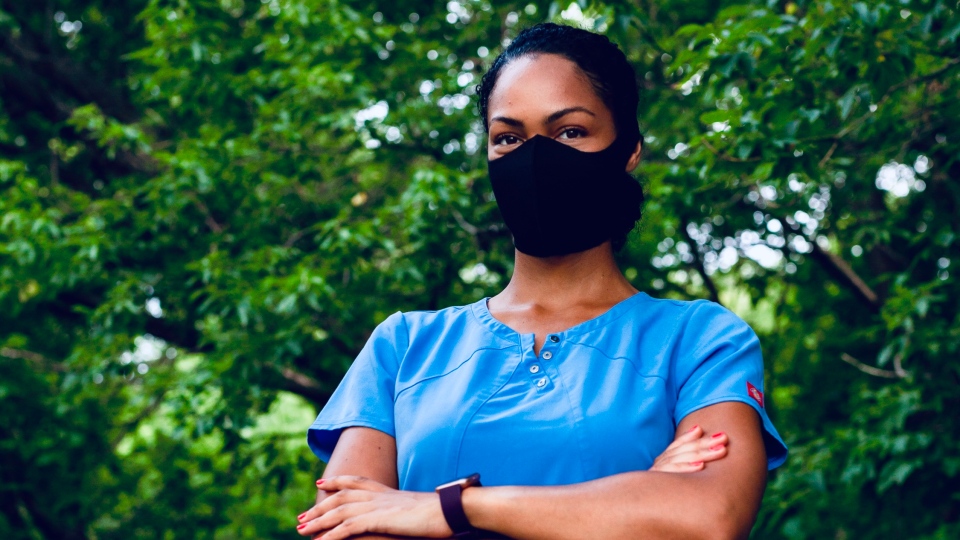 “I was proud to see that there were Black women,” said Casseus. “I discovered professionals that she brought to her project to different levels. I was proud to be part of that project. I found that her project was inspiring for whoever was looking to see ‘What can I do?’ and ‘What are my opportunities in life?'”

“I want to send that message not only to people right now but future generations,” said Mvilongo. “Young girls seeing this and saying, ‘Yay. There’s some kick-ass people making a difference right now.’ I wanted to perpetuate that image.”