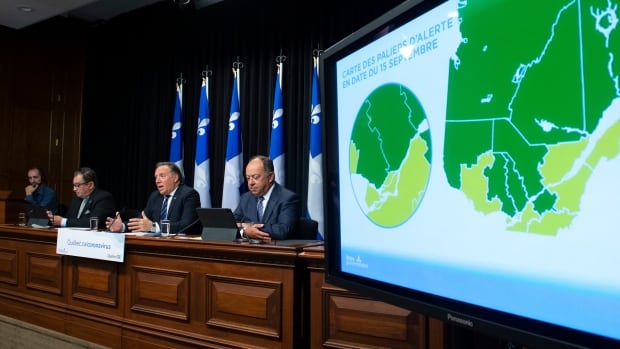 The Quebec government is expected to announce today that it is reducing the size of private gatherings and imposing new restrictions on bars and restaurants in the province’s two biggest cities, after an increase in COVID-19 infections.

Radio-Canada has learned that Montreal, Quebec City and the Chaudière-Appalaches region, which is south of Quebec City, will be placed on “moderate alert.”

That is the orange, or second-highest, alert level under the province’s regional system for categorizing the danger posed by the novel coronavirus.

Government officials told Radio-Canada they are still finalizing their decision, but barring any other major developments, the announcement is expected to be made Sunday.

On Saturday, Quebec reported 427 new cases of COVID-19, the highest daily increase since May.

Being placed in the orange category — up from yellow, designated as the “early warning” level — will come with tightened public-health restrictions. According to Radio-Canada, these restrictions are likely to include:

A provincewide police operation was conducted this weekend to investigate whether bars are respecting public-health rules. Sources told Radio-Canada that further measures could be taken pending the results of the operation.

Gatherings in indoor and outdoor public places are also expected to be limited to 50, as opposed to 250 people. But government officials said there will be exceptions to that rule.

For example, in theatres and cinemas where physical distancing is easily respected, the 250-person limit would remain, but wearing a mask would be mandatory at all times, even when seated.

It is still unclear whether school activities will be affected by the decision to place the three regions in the orange level.

Other provinces are imposing new sanitary restrictions as their COVID-19 cases continue to climb. Ontario Premier Doug Ford announced the province is lowering the number of people allowed at social gatherings across the province. Ontario reported 407 new cases of COVID-19 on Saturday.

Private, unmonitored gatherings will be limited to 10 people indoors and 25 people outdoors for the next 28 days. Those who break these rules risk facing a minimum fine of $10,000 for the organizers and a $750 fine for guests.

In British Columbia, public health officials ask that private gatherings have no more than six people, and that those six people are consistent.

Earlier this month, the province moved to close all nightclubs and ban service of alcohol in bars, pubs and restaurants past 10 p.m., following an increase in COVID-19 cases.