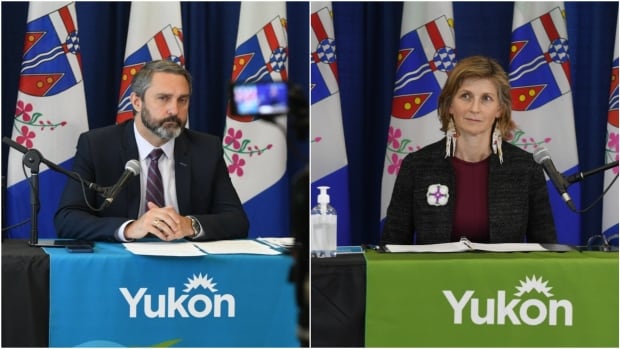 Yukon will ease more public health restrictions on Friday, with leaders saying the territory seems to be through the worst of the Omicron wave of COVID-19.

Premier Sandy Silver said Thursday that the territory’s health indicators “are trending in the right way.”

“We appear to be moving past the peak of the Omicron wave in the territory and we are trending toward safer waters.”

As of Thursday, there were 61 known active cases of COVID-19 in the territory. That’s down from a week ago, when officials said Yukon appeared to be at the peak of the Omicron wave.

The government’s case count does not represent the true number of infections, however. Home rapid antigen test results do not have to be reported to Yukon Communicable Disease Control.

The territory is “coming down the other side” of the Omicron peak, she said.

She also cautioned that the territory is “not completely out of the storm yet,” and said that things could easily turn around.

“It felt yesterday like spring was coming, maybe spring was here. But today there’s snow falling from the sky. It’s a bit like that,” she said.

“What happens next will depend, still, on what we do and how we make the wise choices.”

Health officials also reported one new hospitalization on Wednesday. According to the Yukon Hospitals website, there is “limited” space among inpatient beds in some areas of the Whitehorse hospital, including the intensive care unit.

The hospitals in Watson Lake and Dawson City both had space available, the website says.

Some public health restrictions have eased this month in Yukon, including limits on gatherings. Silver said on Thursday that more would be eased on Friday, such as:

Elliott said restrictions are being eased “so people can make choices.”

She acknowledged some people may be more anxious and fearful as restrictions are lifted. She urged people to take measures to stay safe, and also to be “respectful if people make different choices than the public health measures suggest.”

Asked about the “trucker convoy” protests that have been happening in the territory and elsewhere in Canada, Silver said everybody is frustrated by the pandemic, and that he supports people’s right to demonstrate.

“That’s key to our democratic process. But what I can’t condone would be any of the disruptive or disrespectful behaviour that we’re seeing,” he said, referring to harassment of health care workers or business owners.

He said his government’s decisions have been guided primarily by science, and said that’s been effective.

“We’ve fared very well because of our approach. … most of our citizens have done what we’ve asked, and we’re very grateful.”