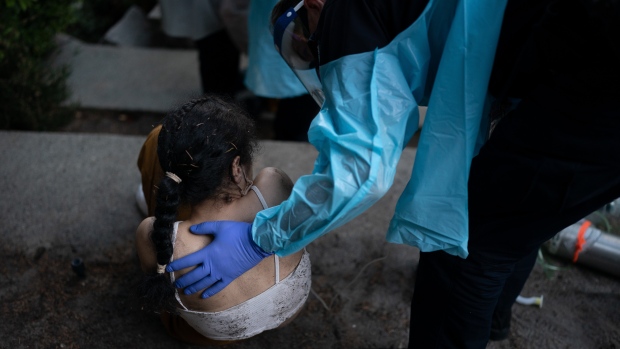 VANCOUVER — More than 1,000 people have died of illicit drug overdose so far in 2021, the latest numbers show.

Data from the B.C. Coroners Service released Tuesday showed at least 1,011 deaths are suspected to have been caused by illicit drug toxicity in the first half of the year.

Most of those people were men. Most were alone when they died.

The latest data includes deaths that occurred between January and the end of June, B.C.’s ninth consecutive month in which at least 150 people died of toxic drug overdose, and the 16th month in a row with more than 100 deaths.

The province’s chief coroner described the toll as a “tragic reminder” that the supply remains a threat to public health and safety across B.C.

In a statement including the latest data, Lisa Lapointe said drug toxicity is now the leading cause of death for British Columbians between the ages of 19 and 39.

In the first six months of the year, the highest number of deaths have been in B.C.’s Lower Mainland. The regions with the highest rates of death were the Vancouver Coastal and Northern health authorities.

Drug toxicity is the leading cause of unnatural death in B.C.

B.C.’s death toll, a number which Lapointe said will grow as additional investigative results are received, is a number that Lapointe says keeps her up at night.

On International Overdose Awareness Day, the chief coroner spoke to CTV Morning Live in Vancouver ahead of an announcement on substance-related harms in the province.

“It’s tremendously sad. As coroners, we speak directly with the families of those who have died,” she said.

Part of the reason these deaths are so devastating is that they’re “completely preventable,” Lapointe said, and they often come after a lengthy struggle from the deceased’s families to find support and help.

“The worst day of their life is when they get the phone call.”

Lapointe was joined by B.C. Emergency Health Services advanced care paramedic Brian Twaites and co-founder of Moms Stop the Harm Leslie McBain for a news conference later in the day, during which she discussed her mid-year report.

The province has been in a public health emergency for more than five years.

As of Tuesday, the total number of lives lost since the emergency was declared is now at 7,760.

“We are in a very, very sad trajectory right now.”

Projections for 2021, based on the first few months, suggest there may be as many as 2,000 or more deaths by the time the year is out.

Lapointe said it’s expected to be another record year.

Among the issues facing users and public health officials is that the supply has become more toxic since the emergency was first declared in 2016, a few years after illicit fentanyl first started to appear in B.C.

“The numbers get bigger and bigger every year. We did see a small decline in 2019 due to the widespread use of Naloxone… so that helped reverse overdoses, but it didn’t help prevent overdoses,” she said.

“What we’ve seen in this province – what we see and continue to see – is fentanyl playing a role in about 85 per cent of the deaths.”

She said the toxic and unpredictable substance is very difficult to manage as a user, and during the pandemic, people have been using alone.

“With the fentanyl carfentanil, and other synthetic narcotics that are now mixed onto the street it takes as I said, the usual dose is point four and there’s times where we’re giving over five milligrams to a patient to try and resuscitate them just to get them to start breathing again,” said

Cocaine, methamphetamine, other opioids and alcohol are also among the substances most commonly found in drug toxicity deaths.

But, Lapointe said, safe supply and prescribed drugs are not a factor in the crisis. Officials are screening carefully for these substances.

Earlier this year, the province unveiled a new way for users to access a safe supply – a bid to save lives that Lapointe called “a small start.”

Health authorities have been tasked with establishing means to provide users with safe substances, something Lapointe said users are hopeful about.

But the plan needs to be “much more robust,” she said, suggesting treatment and recovery options should be priorities in the province as well.

“It’s very hard to come by. Services are very patchy. Eventually what we’d like to see is a provincial program, so that those who are using substances can access safe supply and hopefully at some point they can start to stabilize their lives – their lives are not at risk every day – and then find the services that they need to live healthy lives.”

Speaking at the news conference later, she and other speakers said that these steps, as well as decriminalization, are key in this process.

“How many people must die before all levels of government have the courage, the sense of immediacy and the lack of stigma to say, ‘Enough is enough,’ and to widely implement the measures that they, through evidence, absolutely know will keep people alive?” said Leslie McBain, a co-founder of Moms Stop the Harm.

Asked by CTV News for a key takeaway on International Overdose Awareness Day, Lapointe’s message about users was simple: “They need support.”

Noting previous stigma, including possession treated as a crime, she said substance use or abuse is a medical condition, and support and health-care services are needed before anything will change.

“That has started, but it’s a big shift,” she said