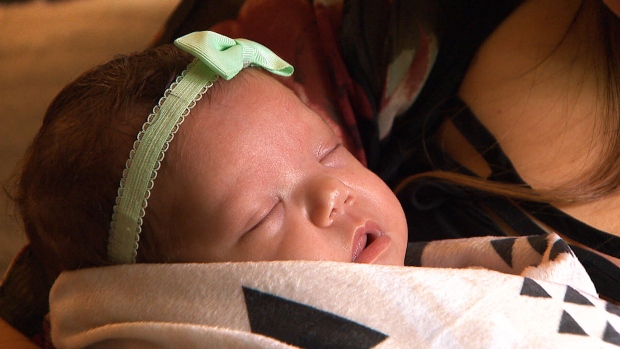 TORONTO — A Winnipeg mother, who was battling COVID-19 and only six months pregnant when she gave birth via emergency C-section, has finally brought home her newborn baby following four months in intensive care.

“I never thought I’d go through something so crazy,” Dhillon said.

She explained that she struggled with infertility before becoming pregnant. However, it was Dhillon’s battle against COVID-19 that landed her in the delivery room.

Dhillon said she was experiencing stomach pains that were initially attributed to the virus. Doctors sent her home to recover, but the pain worsened over the next two days.

“I was told I had COVID when I was just under six months pregnant, and within a few days of that I was in labour,” she said.

Although Dhillon and her husband both had COVID-19, Indiana tested negative for the virus.

But with being born severely premature, the newborn was still in a fight for her life.

“She had everything hooked up to her from her heart rate monitors on her chest, oxygen, respiratory and a feeding tube. So she actually had the feeding tube up until two days ago,” Dhillon said.

After four months of visiting her baby in hospital, Dhillon said they were finally able to bring Indiana home this week.

She said nurses lined the hallway of the hospital to see them off.

“At the women’s hospital they were just like family,” Dhillon said. “They did such an amazing job. I couldn’t thank them enough.”

Now, coming in at a healthy seven pounds, Indiana is ready to meet those extended family members who have been waiting months to see her, including grandparents, cousins, and her uncle Rocky.

“No one could go see her and we all just felt helpless, because we are such a tight family,” Rocky said in an interview with CTV News.

Dhillon says the family will never forget the difficult circumstances Indiana was born under amid the COVID-19 pandemic. Her middle name, Nita, comes from her great-aunt who died from the disease.