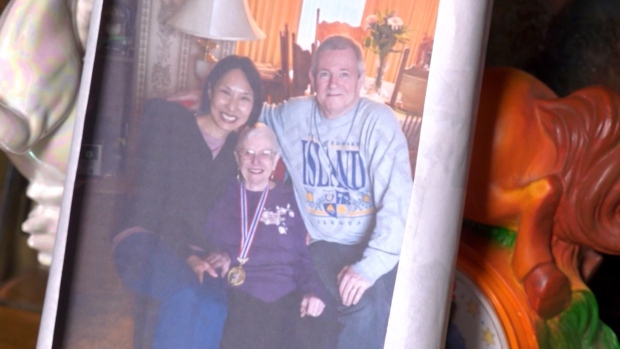 VANCOUVER — For years, they would write letters to each other, addressed “from your other mom” and “to my other mom.”

It would be over a decade before they met in person, but Marie Doherty of Pitt Meadows, B.C., and Carrie Jung of Vancouver have a connection that goes far beyond the written word.

“He was just a tiny little guy when he was born. He was three pounds, six ounces,” Marie said.

“He was the baby,” Daryl said. They both recalled how he grew to become an adult who would help anyone who needed it. “He would’ve given the shirt off his back.”

In June of 2002, Darcy suffered a brain aneurysm. He became an organ donor, something his family said he would have wanted to do.

“To hear that his organs were going to be donated and he was going to make somebody’s life close to normal again, I kid you not, he would have been smiling,” Daryl said.

“He always was doing something for somebody. Whoever needed help, he was there,” Marie said.

At that time, Carrie had been on the wait list for a heart transplant for seven years after being diagnosed with heart failure.

“As soon as the phone rang, I knew that it was the call that i had been waiting for,” Carrie said.

“After I recovered, I was determined to contact the donor family. I wanted to express to them my gratitude,” Carrie said.

In the months that followed, Carrie and Marie began sending each other letters through BC Transplant.

They were not allowed to share identifying information, but kept in touch for 17 years.

“Christmas cards, Easter cards, Valentine’s Day card, no reason at all card,” Carrie said. “She got a picture of what my life was like through those cards.”

If Carrie was travelling, she sent a postcard.

Marie wanted to meet her.

“I always thought of her, and wondered what this person was like,” Marie said.

Up until November 2019, BC Transplant did not facilitate direct contact between donor families and recipients. They were only able to help them exchange anonymous correspondence.

Last fall, following consultation with families and recipients, the policy was changed. Now direct contact can take place if a year has passed since the donation, and both parties have written to each other at least once and submitted independent requests to connect further.

BC Transplant said direct contact can take different forms: from in-person meetings, to simply having each other’s direct contact information to get in touch. Since the policy change, eight recipients and families have been put in direct contact, including two face-to-face meetings.

B.C. and Southern Alberta are the only two regions in Canada to now facilitate such contact.

For Marie and Carrie, their meeting came on February 20th of this year.

“When she walked in the door, it was just like we already knew one another,” Marie said.

“I thought, I’ve come home. This is like a family reunion. So it felt amazing,” Carrie said.

Video of the moment captured by BC Transplant shows the two embracing. Marie had a bouquet of flowers for Carrie. Carrie had brought medals she had won in track and field events following her transplant, to present to Marie and Daryl.

There was also a moment where they took turns with a stethoscope, listening to Carrie’s heartbeat.

“We were able to hear Darcy’s heart beating in Carrie’s chest,” Daryl said. “And to hear the stories of her life that was able to carry on, just unbelievable.”

Marie hopes to connect with the other recipients helped by her son at some point, and both her family and Carrie want to encourage others to sign up to become organ donors.

Meeting in person after all these years was incredibly meaningful for all of them.

“It meant connection more real than on paper,” Carrie said. “It meant truly getting to know the family of the man whose heart lives in me.”

Daryl said he’s deeply grateful to Carrie for the bond she’s formed with his mother over the years.

“You lose a family member but you see the good things that came from the donation. You see that somebody else’s life was able to carry on,” he said. “My mom lost a son. But she gained a daughter.”

For information on registration for organ donation, visit transplant.bc.ca.