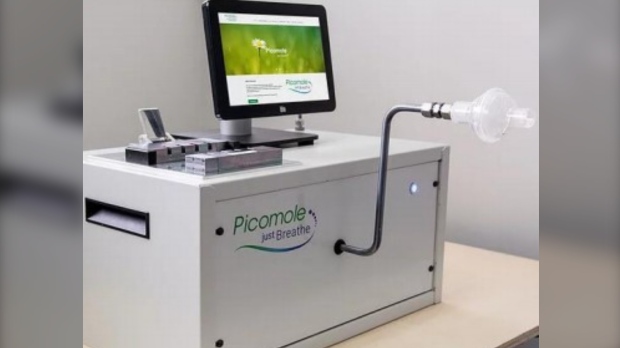 HALIFAX — An innovative screening tool, created by a New Brunswick team, could soon simplify the process of detecting lung cancer.

A partnership between the University of New Brunswick and Picomole Inc. – a Moncton-based company – has resulted in a “first-of-its-kind” technology that could make screening for lung cancer as simple as breathing into a tube.

“On the screen, there’s a bouncing ball that tells them how to breathe. They give their breath sample and that gets concentrated onto a tube that’s about the size of the pen and then that gets sent to our laboratory in Moncton,” explains Stephen Graham, the CEO of Picomole Inc.

Using advanced Al models capable of identifying features in breath called biomarkers, the lab then determines what molecules are in the breath sample and if they’re associated with lung cancer or not.

Robyn Larracy, 23, a biomedical engineering master’s student at UNB, is at the forefront of the project.

Currently, the screening process for lung cancer is a low-dose CT scan. The process is both cost-prohibitive and difficult to administer on a wide-scale due to the need for expensive machinery and highly skilled technicians to operate.

“As a result, the vast majority of lung cancer cases go undetected until symptoms present at later stages, leading to a five-year survival rate of less than 18 per cent,” wrote the company in a news release.

Larracy says they hope to receive approval from Health Canada this summer and start introducing their new screening tools to doctor’s offices as early as 2023.

She also says funding from Mitacs – a not-for-profit organization that fosters growth and innovation in Canada– made their groundbreaking research possible.

“There’s definitely a need for lung cancer screening since there isn’t really an effective, affordable technology out there right now, and it could save a bunch of lives, really,” said Larracy.

“Each year, more Canadians die of lung cancer than of colon, breast, and prostate cancers combined, in part because there’s a large, unmet need for non-invasive lung cancer screening at the early stages,” said Graham, in a news release.

“With Mitacs’ support, we’ve obtained the valuable machine learning expertise we need to advance our technology to the next level, and we’re now poised to make a huge difference.”

The company says they hope their life-saving technology could be used to screen for other diseases one day.

“So, we are doing a concept in Saint John right now with breast cancer,” said Graham. “We’re setting up a study in Parkinson’s. So we’re looking at a bunch of different indications so we’ll be able to build out from lung cancer.”

Currently, researchers say the tool’s accuracy is at 85 per cent. A percentage they hope to improve on over the next few years.