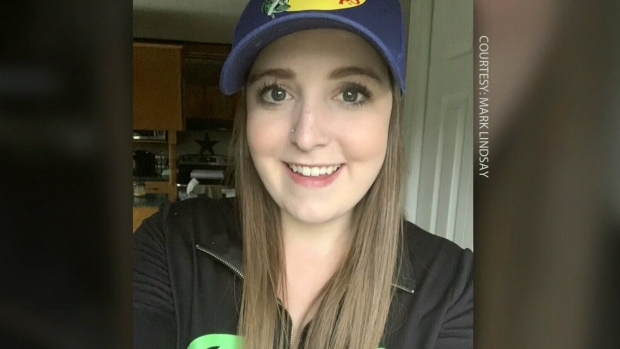 HALIFAX — A Nova Scotia family blames unnecessary bureaucracy for keeping them from accessing a potentially life-saving drug for their daughter.

Chantelle Lindsay has cystic fibrosis, a genetic disease that destroys the lungs and is eventually fatal, and her family says she can’t afford to wait for the drug much longer.

Chantelle’s father, Mark Lindsay, has been spending a lot of time at the hospital after his 23-year-old daughter was admitted five weeks ago.

After being diagnosed at three months old, she has managed her symptoms all her life while staying active — until last October, when her lung function started rapidly decreasing.

“She’s in the QEII, on oxygen, high levels, high-flow oxygen, just waiting for this drug to come, hopefully,” said Mark Lindsay. “It’s been a miracle drug for the ones who have been on it.”

The drug is called Trikafta and was approved for use in the United Sates late last year. It’s a new drug that can treat 90 per cent of cystic fibrosis patients.

Health Canada confirms the drug’s manufacturer, Vertex, has not applied for approval for use in the country yet, and it says it can’t compel it to do so.

Vertex says it’s “not permitted to comment on drugs that haven’t received market authorization in Canada.”

But, it adds that it has “concerns the new Canadian medicine pricing rules have the potential to limit access to treatments.”

“People with cystic fibrosis who are on the front line are already seeing the impact,” said Dr. John Wallenburg, the chief scientific officer for Cystic Fibrosis Canada.

Cystic Fibrosis Canada says what Vertex is talking about are proposed changes to how Canada regulates drug prices.

The goal is to keep prices from being “excessive,” but Wallenburg says there’s been a chilling side effect among pharmaceutical companies.

“The concern is that we’re now going to look like a tier-two or a tier-three country, which means that the drugs will be much much later coming to Canada, if at all,” Wallenburg said.

Mark Lindsay says his daughter’s doctor applied to Health Canada for special access to the drug a month ago — they know they’re on a list.

“It’s just crazy that we have to wait for things that are available that can be life-changing — life-saving in a lot of cases,” he said.

He has posted a letter on social media asking government to help.

Even if Trikafta is submitted for approval, Lindsay’s not sure how long that would take.

“(It) could take six months, a year, two years, I don’t know, but we can’t really wait that long for Chantelle,” he said, fighting back tears. “We’ve got to get it sooner.”