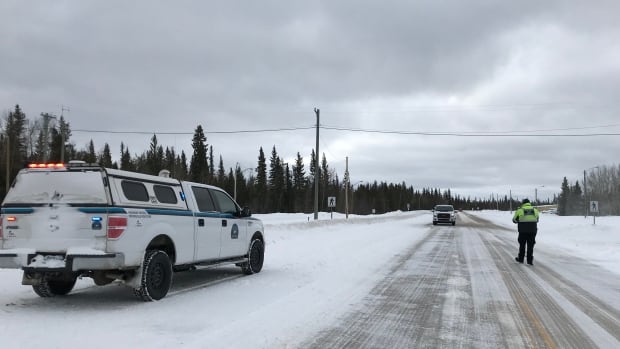 Just days after the territory’s premier surprised residents by suggesting travellers from southern Canada would be welcomed to the N.W.T., health authorities have levied the first ever fine for breaching a public health order on an individual who travelled to the territory from Alberta Wednesday.

An Alberta resident, unidentified in a news release sent Thursday afternoon, “did not stop at the checkpoint on Highway 1 at the 60th Parallel to provide information to, and receive guidance from, peace officers as-required.”

“They drove past at high-speed and continued travelling toward Hay River without any plan to self-isolate,” the release reads.

Border officers contacted the RCMP, who pulled the driver over. In turn, RCMP contacted the territory’s public health enforcement task force to issue a “summary offence ticket” for $1,725 on June 10.

A spokesperson for the territorial government confirmed it’s the first such ticket to be issued in the territory.

An RCMP release also sent Thursday states a 25-year old male was operating a stolen vehicle that was unregistered and uninsured, and was “in contravention of cannabis possession laws.”

RCMP impounded the vehicle and transported the man to High Level, “as they would be in a better position to get assistance in getting home,” the release from health authorities concludes.

The government’s release specifies the legal grounding for the ticket is that the person violated orders “prohibiting travel to or from any area within the Northwest Territories during a public health emergency.”

But the interpretation of a public health order banning travel to the territory made March 21 has been up in the air since Premier Caroline Cochrane suggested in a CBC News Network interview that tourists from southern Canada would once again be welcome in the territory.

Prior to the interview, health officials repeatedly informed residents that non-essential travel to the territory was prohibited.

“Travellers have the opportunity to voluntarily turn around,” the statement read. “If they choose not to, they are informed that they must seek an exceptional circumstances exemption, and immediately self-isolate if they wish to proceed further in the N.W.T.”

The statement said the territory’s enforcement officers have been working with that new interpretation of the public health order since May 29 — nearly two weeks prior to Cochrane’s interview and the first public acknowledgement of the change.

The change, according to the statement, was made to “more closely align implementation of the order with the mobility provisions of the Canadian Charter of Rights and Freedoms.”

Since late May, the Canadian Civil Liberties Association has been threatening territories and provinces with charter challenges for laws prohibiting domestic travel.

“With respect, there is no evidence that a total ban on some individuals entering the territory can be justified when less restrictive measures could clearly achieve the same public health goals,” reads the letter addressed to Justice Minister Caroline Wawzonek.

It’s not immediately clear whether this ticket could open the territory to a constitutional challenge.

On May 20, Conrad Baetz, the N.W.T.’s head of enforcement, said in an interview with CBC that any ticket issued by a public health officer would be able to stand up in court.